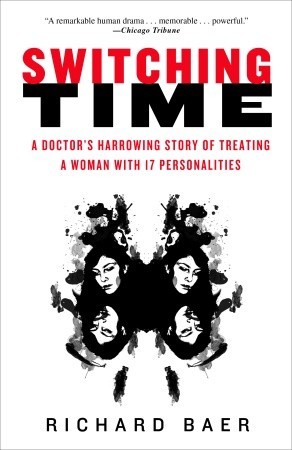 I have a big fascination with Multiple Personality Disorder (now called Dissociative Identity Disorder). It started with reading Sidney Sheldon's Tell Me Your Dreams, in which a woman has three alters and since this is Sidney Sheldon, there's a lot of sex and damaged woman issues. Then there was an Indian movie, Anniyan, that tackled this issue. The movie was a success but it was more entertaining and less informative about the illness. I've read that book and watched the movie multiple times just because that illness fascinated me. And so, when I saw Switching Time for sale in Audible, I purchased it after doing a quick review scan to make sure people were somewhat happy with the book and that it wasn't fake like Sybil's story is.

Switching Time is about a woman with Multiple Personality Disorder and told from her psychiatrist's perspective. Karen, the subject with the disorder, has 17 alters that were born to help her deal with severe trauma. She has been raped too many times by her father, her grandfather, her grandmother's brother, neighbors, friends of her father, and others. While this was happening, her own mother pretended she couldn't see what was happening in front of her, and years later, would deny that any such thing happened.

Karen's father and grandfather were members of a small cult and would brainwash Karen into believing that she was a devil and deserved to be tortured. As part of their rituals, she has had all kinds of pointy objects scar her skin and inserted into her. If not the rituals, then it is some night-time gathering at her parents' house, where her father invited his colleagues to rape Karen for a fee. Some men weren't too comfortable about this, but the fear of losing their jobs made them accept this "offer". I was honestly in shock. I know that there is a lot of abuse in this world but it's always been something I read about in the news, or vaguely mentioned in a book, or seen in a movie or the news. I have also read a few books where there is significant abuse, but nothing of the sort that's in Switching Time, where one person gets abused consistently over a significant period of time. Karen mentions growing up hearing everyone question her self-worth that it never occurred to her even as an adult that they could be wrong, that she deserves every bit of respect that every other person gets.

When Karen arrives at Dr. Richard Baer's office, she doesn't have even one iota of confidence or desire to fix her problems. She was depressed, docile, diffident, and not sure what to look forward to during her therapy sessions. It isn't until a few years later that her disorder is revealed.

It is fascinating what the mind is capable of to protect itself. Karen's mind would split itself when she was facing a particularly unbearable trauma. Some of her alters are males who were created when she was being raped. Since a male doesn't have a vagina, it cannot feel the rape, thus protecting Karen from the experience. They also do not share those terrible memories with Karen, so she really didn't "know" most of these incidents when Dr. Baer was treating her. Besides, each of these alters held a certain trait of Karen - there was an artist, a sweet little girl, a devout, and two alters who took care of all the alters and managed them. There was also one who had a propensity to steal, another one who over-ate to deal with issues, and then several alters who came out when Karen was hurt particularly bad and hence would forever carry those pains with them.

Yes, there is a lot of sad stuff in this book. But oddly enough, it was also optimistic. I knew that she will recover and I just wanted to cheer her on while she battled her inner demons. If reading about child abuse is something you can stomach, this is a book that should be on your list. Despite how much Karen has suffered, Switching Time is really about the awesomeness of the human mind and how it can also be fixed.

Be warned though that the writing in this book isn't particularly great. It reads more like a journal and could have benefited from a good editor to remove some of the repetitions and redundancies. It was easy on the ears though - it gave the impression of someone narrating their experiences realtime. Therefore the audiobook is certainly highly recommended. There's also a ton of fascinating stuff in this book so those made for some exciting listening. This is probably among my fastest listens - the audiobook is about 13 hours, but I took to listening to it whenever I had a few minutes to spare.

JoAnn @ Lakeside Musing said…
I'm fascinated by this disorder, too... it probably started when I read Sybil decades ago. Not sure I could handle this one though. I'm going to head over to audible and listen to a sample.
October 22, 2014 at 7:37 AM

Athira / Aths said…
Let me know if you choose to read/listen to it. Some parts were quite gut-wrenching, but there was so much I learned by the end.
October 22, 2014 at 1:09 PM

bellezza said…
I have a BA in Psychology, from years ago!, and have always been fascinated by all things psychological. Although it does crack me up that there's a new name for this disorder, a new name seems de riguer for all things nowadays, it would be such an interesting story.
October 22, 2014 at 10:20 PM

literaryfeline said…
I remember reading Sybil and When the Rabbit Howls years and years ago. I have a copy of the book detailing the truth about Sybil (just how untrue that story was, I mean), but I haven't yet read it. And I love the movie Primal Fear--even though, well, you know if you've seen it. :-)