This meme is hosted by MizB at Should be reading. What great books did you hear about/discover this past week?

This week, I came across a huge bunch of books. Probably has to do with the never ending lists of book gifts that were given over the past two weeks, and the renewed enthusiasm for the books to be released this year. 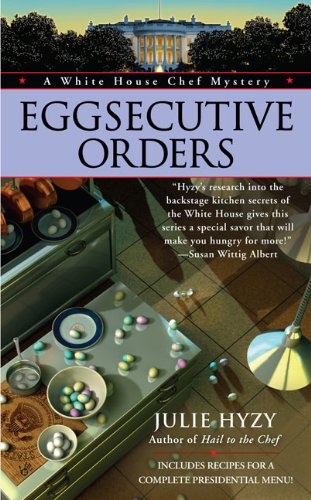 When NSA big shot Carl Minkus dies right after eating the dinner Olivia Paras's staff had prepared, all forks point to them. Now the Secret Service is picking apart the kitchen-and scrutinizing the staff's every move. The timing couldn't be worse with the White House Lawn Easter Egg Roll to prep for without access to a kitchen. Olivia must find the real culprit-before she cracks under pressure.

All Unquiet Things by Anna Jarzab

Carly: She was sweet. Smart. Self-destructive. She knew the secrets of Brighton Day School’s most privileged students. Secrets that got her killed.

Neily: Dumped by Carly for a notorious bad boy, Neily didn’t answer the phone call she made before she died. If he had, maybe he could have helped her. Now he can’t get the image of her lifeless body out of his mind.

Audrey: She’s the reason Carly got tangled up with Brighton’s fast crowd in the first place, and now she regrets it—especially since she’s convinced the police have put the wrong person in jail. Audrey thinks the murderer is someone at Brighton, and she wants Neily to help her find out who it is.

As reluctant allies Neily and Audrey dig into their shared past with Carly, her involvement with Brighton’s dark goings-on comes to light. But figuring out how Carly and her killer fit into the twisted drama will force Audrey and Neily to face hard truths about themselves and the girl they couldn’t save.

By The Time You Read This, I'll Be Dead by Julie Anne Peters

Daelyn Rice is broken beyond repair, and after a string of botched suicide attempts, she's determined to get her death right. She starts visiting a website for "completers"- www.through-the-light.com.
While she's on the site, Daelyn blogs about her life, uncovering a history of bullying that goes back to kindergarten. When she's not on the Web, Daelyn's at her private school, where she's known as the freak who doesn't talk.
Then, a boy named Santana begins to sit with her after school while she's waiting to for her parents to pick her up. Even though she's made it clear that she wants to be left alone, Santana won't give up. And it's too late for Daelyn to be letting people into her life. Isn't it?
National Book Award finalist Julie Anne Peters shines a light on how bullying can push young people to the very edge.

Brooklyn can’t sleep. Her boyfriend, Lucca died a year ago, and now their friend Gabe has died of an overdose. Every time she closes her eyes, Gabe's ghost is there, waiting for her. She has no idea what he wants or why it isn't Lucca chasing her through her dreams.

Nico can’t stop. He’s always running, trying so hard not to feel the pain of missing Lucca. But when he begins receiving messages from his dead brother, telling him to help Brooklyn, emotions come crashing to the surface.

As the nightmares escalate and the messages become relentless, Nico reaches out to Brooklyn. But neither of them can admit that they're being haunted. Until they learn to let each other in, not one soul will be able to rest.

The Espressologist by Kristina Springer

What’s your drink of choice? Is it a small pumpkin spice latte? Then you’re lots of fun and a bit sassy. Or a medium americano? You prefer simplicity in life. Or perhaps it’s a small decaf soy sugar-free hazelnut caffe latte? Some might call you a yuppie.

Seventeen-year-old barista Jane Turner has this theory that you can tell a lot about a person by their regular coffee drink. She scribbles it all down in a notebook and calls it Espressology. So it’s not a totally crazy idea when Jane starts hooking up some of her friends based on their coffee orders. Like her best friend, Em, a medium hot chocolate, and Cam, a toffee nut latte. But when her boss, Derek, gets wind of Jane’s Espressology, he makes it an in-store holiday promotion, promising customers their perfect matches for the price of their favorite coffee.

Things are going better than Derek could ever have hoped, so why is Jane so freaked out? Does it have anything to do with Em dating Cam? She’s the one who set them up! She should be happy for them, right? With overtones of Jane Austen’s Emma and brimming with humor and heart, this sweet, frothy debut will be savored by readers.


Check out what others discovered here!