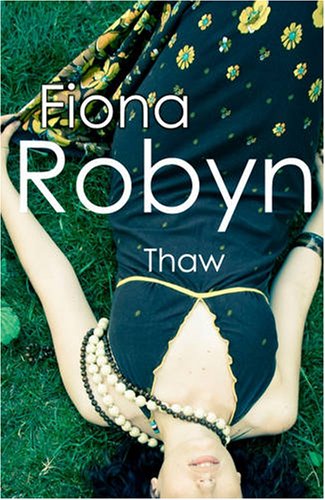 A couple of months ago, I blogged about author Fiona Robyn's Thaw Blogsplash event, that will grace the blogosphere on March 1st. Well, it's finally here!! And Yours Truly is one of the participants of this event.


Ruth is thirty two years old and doesn't know if she wants to be thirty three. Her meticulously-ordered lonely life as a microbiologist is starved of pleasure and devoid of meaning. She decides to give herself three months to decide whether or not to end her life, and we read her daily diary as she struggles to make sense of her past and grapples with the pain of the present. "Thaw" explores what makes any of our lives worth living. Can Red, the eccentric Russian artist Ruth commissions to paint her portrait, find a way to warm her frozen heart?

Ruth's diary is the new novel by Fiona Robyn, called Thaw. She has decided to blog the novel in its entirety over the next few months, so you can read it for free.

Ruth's first entry is below, and you can continue reading tomorrow here.

These hands are ninety-three years old. They belong to Charlotte Marie Bradley Miller. She was so frail that her grand-daughter had to carry her onto the set to take this photo. It's a close-up. Her emaciated arms emerge from the top corners of the photo and the background is black, maybe velvet, as if we're being protected from seeing the strings. One wrist rests on the other, and her fingers hang loose, close together, a pair of folded wings. And you can see her insides.

The bones of her knuckles bulge out of the skin, which sags like plastic that has melted in the sun and is dripping off her, wrinkling and folding. Her veins look as though they're stuck to the outside of her hands. They're a colour that's difficult to describe: blue, but also silver, green; her blood runs through them, close to the surface. The book says she died shortly after they took this picture. Did she even get to see it? Maybe it was the last beautiful thing she left in the world.

I'm trying to decide whether or not I want to carry on living. I'm giving myself three months of this journal to decide. You might think that sounds melodramatic, but I don't think I'm alone in wondering whether it's all worth it. I've seen the look in people's eyes. Stiff suits travelling to work, morning after morning, on the cramped and humid tube. Tarted-up girls and gangs of boys reeking of aftershave, reeling on the pavements on a Friday night, trying to mop up the dreariness of their week with one desperate, fake-happy night. I've heard the weary grief in my dad's voice.

So where do I start with all this? What do you want to know about me? I'm Ruth White, thirty-two years old, going on a hundred. I live alone with no boyfriend and no cat in a tiny flat in central London. In fact, I had a non-relationship with a man at work, Dan, for seven years. I'm sitting in my bedroom-cum-living room right now, looking up every so often at the thin rain slanting across a flat grey sky. I work in a city hospital lab as a microbiologist. My dad is an accountant and lives with his sensible second wife Julie, in a sensible second home. Mother finished dying when I was fourteen, three years after her first diagnosis. What else? What else is there?

Charlotte Marie Bradley Miller. I looked at her hands for twelve minutes. It was odd describing what I was seeing in words. Usually the picture just sits inside my head and I swish it around like tasting wine. I have huge books all over my flat - books you have to take in both hands to lift. I've had the photo habit for years. Mother bought me my first book, black and white landscapes by Ansel Adams. When she got really ill, I used to take it to bed with me and look at it for hours, concentrating on the huge trees, the still water, the never-ending skies. I suppose it helped me think about something other than what was happening. I learned to focus on one photo at a time rather than flicking from scene to scene in search of something to hold me. If I concentrate, then everything stands still. Although I use them to escape the world, I also think they bring me closer to it. I've still got that book. When I take it out, I handle the pages as though they might flake into dust.

Mother used to write a journal. When I was small, I sat by her bed in the early mornings on a hard chair and looked at her face as her pen spat out sentences in short bursts. I imagined what she might have been writing about - princesses dressed in star-patterned silk, talking horses, adventures with pirates. More likely she was writing about what she was going to cook for dinner and how irritating Dad's snoring was.

I've always wanted to write my own journal, and this is my chance. Maybe my last chance. The idea is that every night for three months, I'll take one of these heavy sheets of pure white paper, rough under my fingertips, and fill it up on both sides. If my suicide note is nearly a hundred pages long, then no-one can accuse me of not thinking it through. No-one can say, 'It makes no sense; she was a polite, cheerful girl, had everything to live for,' before adding that I did keep myself to myself. It'll all be here. I'm using a silver fountain pen with purple ink. A bit flamboyant for me, I know. I need these idiosyncratic rituals; they hold things in place. Like the way I make tea, squeezing the tea-bag three times, the exact amount of milk, seven stirs. My writing is small and neat; I'm striping the paper. I'm near the bottom of the page now. Only ninety-one more days to go before I'm allowed to make my decision. That's it for today. It's begun.


Wow! I wonder what decision she comes to!

So if you are like me - excited about this book, and deeply interested in its theme, or even just curious or interested in this event, head over to the Thaw blog and let's get reading! Well, what are you waiting for??

Marce said…
I am a part of the blogsplash also. I started reading the book and it is just like a journal, there are times I want to skip or just go to the end and see what happens :-)

Here is my blogsplash, what are your thoughts? Have you read a Fiona Robyn book before?