Halfway through a year is a good time to look back at all the books that were on my nightstand this year, wondering which books will still be hot favorites by the end of the year, which ones were disappointments, and which ones were of the impossible-to-get-into kinds. It is also a wonderful time to take oneself off challenges that don't interest you anymore, or more typically, add more, as I just did yesterday.

This post is more dedicated to the unfinished books so far. I wasn't planning on doing this post now, since I've only had two books so far that I couldn't complete. But I realized that my recollections of those books are fast slipping out of my head, so here's an attempt to salvage them and write a decent explanation of why those two books didn't quite work for me. 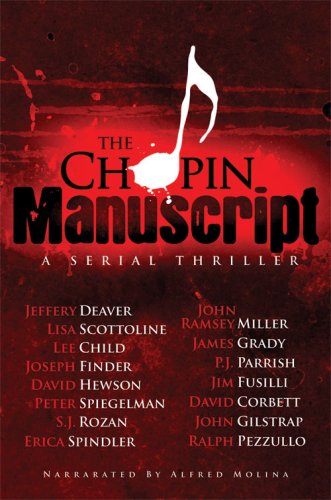 The Chopin Manuscript by Jeffery Deaver.


Former war crimes investigator Harold Middleton possesses a previously unknown score by Frederic Chopin. But he is unaware that, locked within its handwritten notes, lies a secret that now threatens the lives of thousands of Americans. As he races from Poland to America to uncover the mystery of the manuscript, Middleton will be accused of murder, pursued by federal agents, and targeted by assassins. But the greatest threat will come from a shadowy figure out of his past: the man known only as Faust.


The Chopin Manuscript is actually co-authored by 15 thriller writers - Jeffery Deaver, Erica Spindler, Joseph Finder, Lisa Scottoline and Lee Child being some of them. According to the book description, Jeffery Deaver conceived the characters and set the plot in motion; the other authors each wrote a chapter in turn, with Deaver eventually writing the final chapter. So clearly, The Chopin Manuscript has a lot going for it. This book is only available in audio or in Kindle format.

I listened to three-four chapters before giving it up. I'm not exactly sure what made me stop, but after the first few chapters, I found that I was hardly "on my toes" or anxious to know what happens. At least, that's what I would expect considering that this is a thriller. I found at least one-two new characters introduced in each of the first few chapters, and moreover, those chapters focused only on them. This would have worked fine, if most of them were introduced within two chapters, so that by the time I return back to a character introduced in the first chapter, I have a clear idea of who's who. Instead I forgot. It didn't help either that I listened only half an hour one day, then didn't get back to it until after a couple of days. (I rarely get to listen to audio books except at the gym. I don't have much commuting to do either each day.)

On the other hand, I have read plenty of good reviews of this book, and the plot is by no means what disappointed me. I will probably pick this one up another time - when I can listen to audio books extensively. But for now, it's going into the unfinished folder.


Lawyer Danielle Parkman's son Max, a whip-smart teen with high-functioning autism, has always been a handful. But lately he's shutting down, using drugs and lashing out - violently. Desperate, Danielle brings Max to a top-flight psychiatric facility for a full assessment. But rather than reassurance, Danielle receives an agonizing diagnosis describing a deeply damaged, dangerous boy - one she's never met. Then Danielle finds Max unconscious and bloodied at the feet of a patient who has been brutally stabbed to death. A fiercely protective mother instinct rears its head - and Danielle is arrested as an accessory to the heinous crime. With the justice system bearing down on them both, Danielle steels herself to discover the truth - no matter how horrifying.


I requested this for review from NetGalley and was reading it on my nook. I did get till page 175 before giving up. There is so much that didn't work for me in this book, but mainly it is the writing. At times, it is jerky and slightly immature, with certain phrases not making sense to me.

Then there is the character, Danielle, herself. I hope I don't come across as insensitive when I say that I found this mother of an autistic son too unbelievable. I felt that the author was trying too hard to convince me of Danielle's nonacceptance of Max's condition. Apparently a lot of roguish practices happen at the top-rated psychiatric facility, without anyone battling an eyelid. (I am basing this on the 175 pages I did read - the plot might have veered in any direction since that page.) When I decided to give up, I also realized that I wasn't curious about how it will end. I usually like thrillers or suspenseful novels, but only if I can easily flit into the novel's settings without struggling with my beliefs or conscience or my interpretations of the story so far.

I'm sure this is just a problem I had with the book, since I have seen quite a few positive reviews of this book. But with 200 pages still left for me to read, I decided to part ways.

Ash said…
It looks like you gave both of these books a fair chance. I think you had sound reasoning for giving them up. I've only "given up" one book this year and that was The Secret History of the Pink Carnation. I skimmed to the end, but my heart just wasn't in it.
July 6, 2010 at 12:45 AM