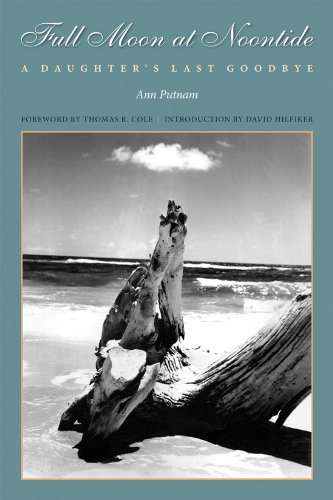 Ann Putnam had just reached home after a day at work, when her daughter tells her that "Grandpa had a stroke", with "no preamble and no way to soften it".


Doesn't it always begin that way? A telephone call across the miles, one reality exchanged for another in an instant. Not that you weren't waiting for it all along in some dark place of your mind where you hold such things that cannot yet be brought into the light. You wish for a bad connection, crossed lines, a lapse in hearing, a rush into dream. But you're only hearing what you fear, though none of it seems real.

Ann's father and mother stayed just four hours away along with her uncle, who was her father's identical twin - all in their eighties. Her father's stroke was only the beginning of a long journey towards death and loss, accompanied by an endless frenzy of diseases, sadness, closure, regular visits to the doctor, a move to a retirement home first, then a nursing home. Ann will lose all three within a span of five years, and then just three months from the publication of her book, she loses her husband to cancer.

I cannot even begin to fathom the kind of tragedy that had befallen Ann Putnam. But why do I look at it like a third person when this could happen to anyone - in fact does happen to a lot of people lucky or unlucky to live all the way to the ripe 80s or 90s? In fact, our perspective to an old person on the verges of death is sometimes, if not all times, callous and lacks feeling. We have been through the infant-years, childhood, adolescence, teenage years, middle age, and so on, depending on where we stand on the age chart. But old age is something we haven't yet encountered, unless we have seen it in our own parents or grandparents. Full Moon at Noontide occasionally shows some of this lack of concern from a bystander, and then it slaps you in the face when you remember all the times you didn't smile at the old lady across the street, or that day when you just looked away from that sick man in the restaurant, still in his hospital clothing.

Full Moon at Noontide was a gut-wrenching reading experience. And I mean every word of that. There is a lot of sadness in this book, and I cried at almost every page. It reminded me of the grandparents I lost, and the other old folks I never got to know. As a friend of mine says, "life happens and so does death". But as in Ann's case, where do you even get the strength to watch three dearest people snatched from you suddenly within a few years? Add your spouse and your adorable dog to that equation, and I might even give up on life totally. And that is where this beautiful memoir scores. It doesn't leave you feeling depressed and upset at the rules of life and death. Instead, it teaches you several lessons in a subtle manner. It opens you up to the very realities of the lives of the people when they are old and near-death - that regular visit to the hospital, each time returning back leaving behind a part of you; that frequent lapse of memory and/or consciousness; that simple smile on their face when they see their child or grandchild; and that week-long waiting for the weekly ritual of a night out at a restaurant.

Death scares me a lot. It is the one big fear I have been having for years. And when I was about to start reading this, I was expecting to put it down every few pages. But as Thomas R. Cole, who wrote the introduction for this book said, I was also seduced by this book from the beginning. Ann weaves the characters of the twins - Homer (her father) and Henry, and her mother, Grace, so vividly, that by the time I turned the last page, I felt I lost someone so dear to me. These three amazing characters had very successful lives, and to see them struggle through their last years in life was very hard for me, and yet this is what happens in reality. But their life is not all tragedy, as there is plenty of humor in the book to get through the days of watching them slip away. I had never before looked at life from their perspective - it was always as a third person. But Full Moon at Noontide changed that. It made me want to reach out to Ann, hug her and tell her it's alright. Her experiences were tragic, but she faced them with a courage that I surely do not have.


I haven't stayed long enough or come often enough no matter how long I stay or how often I come.


And how often we regret that we don't spend enough time with them. I still have some, though I know it is too late to worry about it. In so many ways, I am really glad I read this book. I know many will refrain from reading a book such as this, simply because of all the sadness it may induce. But far from being a depressing read, this book is a knowledge mine - about families, identical twins, and relations; about love and sacrifice; about closure and courage; and about a daughter's last goodbye.

I received this book for free from the publisher via Pump Up Your Book.

Anonymous said…
Thank you fo your honest and insightful review. I will put this on my TBR memoir list.
July 8, 2010 at 8:53 AM

thewriterslife said…
I've got the book and will be reviewing it myself before the end of the month and I can't imagine reading it without a box of hankies nearby. Anyway, thank you so much for the wonderful review!
July 8, 2010 at 12:48 PM