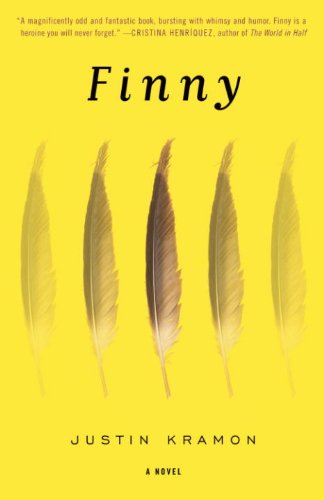 Finny is the story of Delphine Short, better known as Finny, whose adventurous odyssey of a life spans twenty eventful years from the time she's fourteen. She is an independent no-nonsense girl - the kind of girl I secretly envied in the playground. When her aunt pinched her cheeks, she would pinch her aunt back on the breast. Her father took every opportunity available to speak quotes and then solemnly proclaim the name of the person responsible for the quote. Her mother gave protocol advice fitting an upper echelon socialite. On top of this, her brother Sylvan was that annoying sibling or classmate you had who sucked up to his parents at every opportunity and pretended to be better than he was. Tired of all this drama, Finny decides to run away from home one day, thus setting several wheels in motion - wheels that define the rest of the book. Because Finny meets Earl.

Finny has a bunch of dysfunctional characters. In fact, I would be hard-pressed to mention even one normal character. And if you know me, I am all for dysfunctional books. Maybe because I think most people are dysfunctional in their own ways? Or maybe because I find them very endearing in their sweet little annoying characteristics. Finny probably seemed the most normal character to me, but she was hardly one. I loved her bluntness and her sassy jokes. I found I could identify so much with her and how when she spends a lot of time waiting for something good, it never happens. Earl was a totally different matter. I appreciated his dedication to his dream, but really, if I were his kin, I would have given him a sound beating. Finny and Earl loved each other a lot, but as most would expect, they have issues. Halfway into the book, I was praying that what-eventually-happened between the two wouldn't happen, and I was all ready to throw the book against my wall (figuratively) if it did. But of course, what-eventually-happened happened and I only hugged the book tighter. Does that say something about how well the ending fell into place without me having to groan out loud?

My favorite dysfunctional character from Finny was Poplan, who was in charge of the dorm in which Finny briefly stays, but who becomes one of Finny's closest friends through the rough following years. Poplan, whose favorite game is Jenga, and who performs near-theatrical expressions of delight whenever she wins the game, which is always. Earl's father, Mr. Henckel, has the scary habit of falling asleep suddenly, in the middle of a piano performance or animated chatter. Finny's principal in boarding school is nicknamed Old Yeller because her screeching yells make her students cover their ears even in front of her. In fact, there are so many oddities sprinkled through the book that in spite of the current situations, you can't help but laugh.

If I had to give you the name of a movie or book that Finny reminded me of, I would say 500 Days of Summer, and I don't even know why since the two are so disparate. The only similarity I can think of is the mixture of happiness and sadness that finishing the book (or movie) brings you. You're happy with it, but your reactions are more about the ride than the destination.

One of my favorite parts of the book were the last chapters of the first two sections. (The book is divided into three sections.) They are interludes in Finny's life, and Justin Kramon writes the chapters in that same hurried rush with which you talk of a "gap-filler" when recounting any story. The part between the important parts. The parts that are usually shown in movies with a heavy soulful background music. The part when you either go to the kitchen to get a glass of juice or when you stare at the screen feeling heavy for the characters. The statements aren't complete, but rather mere phrases that are only meant to explain what various characters are up to during the interlude.


Phone calls to Judith. Sylvan handing the phone to Finny each time... A winter night. Finny waking up and hearing Raskal whimpering in the kitchen... Afternoons with Poplan and Mr. Henckel. Coffee. The silver pot, the little silver spoons....

In so many ways, Finny, and the namesake - Finny herself, took me back to my school and college years - especially those very embarrassing events you want to forget about. The second half of the book had more of an impression on me than the first, probably because by then I got very attached to the characters - even the less unlikeable ones, like Finny's best friend, Judith. I can see a film being made out of this book, and wouldn't be surprised when that gets going. I did shed quite a few tears reading this book, and like someone said - this is a really quick read, esp when you consider I read nearly 300 pages in one evening. I had to finish it!

Check out this book published by Random House @ Goodreads, BetterWorldBooks

I received this book for free from the publisher via TLC Book Tours.

bermudaonion said…
I thought this book was terrific, but Judith was terribly annoying. It was hard to get too mad at her though, because when you really thought about it, she was sad.
September 8, 2010 at 8:29 AM

Tales of Whimsy said…
Ooo embarrassing moments. I cringe just thinking of those. Great review.
September 8, 2010 at 8:38 AM

Anonymous said…
Aths, thank you so much for this review! I'm so pleased that you enjoyed the book so much.

Kathy, I'm really glad that you saw those two sides of Judith. I think she can be intimidating at first, but I'm not sure that anyone would really want her life.

nomadreader said…
I'm really looking forward to this one. I confess, the cover didn't do much for me, but all the great reviews have. Thanks for adding to my impetus to read it!
September 8, 2010 at 12:43 PM

Anonymous said…
I LOVED the quirky characters in this book - for me, they were the best part! Thanks for being a part of the tour. I'm so glad you enjoyed the book. :)
September 8, 2010 at 9:14 PM

Athira said…
Kathy, that's what I felt too. I didn't like Judith much, but I didn't want Finny to abandon her either. I wanted Finny to wake up and look at Judith for who she really was. But deep down I didn't want anything bad to happen to Judith.

Juju, honestly, I'd rather erase those memories.

Justin, thank you so much for stopping by my blog!

nomadreader, I sure hope you read it! You should let me know how you find it once you read it.

Helen, it sure is! It's quite delightful!

The Crazy Bookworm, thank you so much!