Review: The Game On! Diet by Krista Vernoff and Az Ferguson 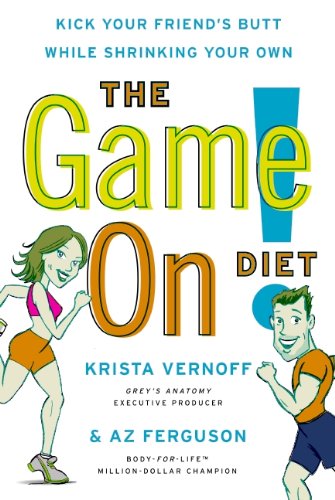 Subtitled: Kick Your Friend's Butt While Shrinking Your Own

After two-three months of displaced schedules and irregular routines, I found it hard to settle in after starting my new job. I had a lot of stuffs to do and buy, and every evening I came home to an overwhelming panicky feeling because I keep doing chores but they never end. So I ended up doing what I always did in such scenarios - procrastinate. When Sheila contacted me asking if I would like to do this game, I jumped right in. Granted, that was a tall order considering that I was still yet to get used to my new life, but I figured if not now, then I'll probably never get to it.

The Game-On! Diet game is not really a diet book - at least it's not like other diets I've read of. Rather, it's an approach to diets. There are guidelines and recommendations and points for doing things the book's way. I don't like diets, but I read a lot about them. I think that doing one is simply equivalent to giving a rough time to your body, but then over-eating is also the same. I love eating out, but I do it only sparingly. I mostly cook at home, and also work out regularly. I never deprived myself of junk food when I really wanted it. This book also enforces the same message.

Four weeks after doing this game, I can tell you that there are habits I will probably never change. For instance, this book advocates 5 small meals a day. I will be sticking to it even though I'm done with the game now. I've never gone hungry since starting this game but I've never put on too many pounds either. Previously, I never really looked at what I ate. I implemented portion control, but didn't check if I was getting my required carbs, proteins and fats per day. Now though, I find that I plan my meals better. I no longer eat whimsically. I don't feel guilty either when I overeat one day or eat fatty foods, because as the book says, my body needs a calorie boost once in a while, and it's right - that has never deflected my bathroom scales too much.

I also loved the focus this book throws on inculcating new habits and weeding off bad ones. The participant can choose a new habit to develop and an old one to let go off. In addition, points are accumulated based on whether each daily goal was met. Although I rebelled a lot in the first week, because I just didn't want to do any meal overhauls, I found that I like it better now. In fact, it's lesser time in the kitchen nowadays on weekdays, and that's a real blessing because I get so tired by the time I get home each day.

However, I wasn't impressed with the author's tone in the book. I found myself getting irritated with the constants "NO, don't do this", or "That's allowed but our research has shown that this works better", etc. One thing I have learnt about diets is that if one diet works for someone, it doesn't have to work for another person. There is no black and white set of rules here. And each time, I found myself rolling my eyes or snarking back at the book. While the author's intention is good (to strongly encourage the reader to do something), I don't think the way it was done really appealed to me. If someone picked this book to read, it is probably because that person wants to try a different way to lose or maintain weight. For that reason alone, I don't think the author needed to try too hard to convince.

I will recommend this book to anyone who wants a healthy lifestyle. Doing the game really helps because after doing something repeatedly for four weeks, most of the habits stick. And then you have the choice to decide which routines to keep and which to bid adieu to. As for weight, I did shed a few and managed to get to my overall target weight. Mostly though, I feel healthier.

Check out this book @ Goodreads, BetterWorldBooks

I bought this book and read it on my nook.

bermudaonion said…
I do think the aspect of starting good, new habits and letting go of old, bad ones adds a lot to this diet.
October 5, 2010 at 8:11 AM

Helen's Book Blog said…
Our society is so obsessed with looking good and there are so many crazy diets out there (and people making money off of the ideas). This book sounds a little saner than most and more realistic. We all need to realize that fewer/better calories in and doing exercise is what it takes.

Athira said…
Kathy, that's what really attracted me to this one. Holistically, it inculcates a lot of good habits.

Helen, it's so annoying right when a slim (not beautiful) girl is always preferred by society? I hate what diets mean to girls because of this. We need healthy girls not anorexic ones.

Sheila (Bookjourney) said…
Good post! I struggled with some of her language in the book. Die to that it wasn't one I could offer to just any of my friends to join in.
October 11, 2010 at 4:19 PM

Athira said…
Piyush, I didn't forget. :D I have it carted on a website whose password I forgot, I'll do it right away. :)