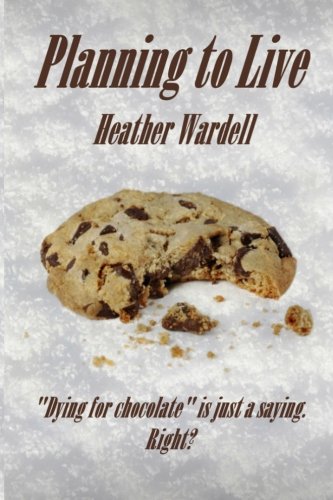 Rhiannon Taylor leaves her parents' Christmas feast in a hurry, to avoid eating all the high-calorie foods that she is so tempted to have. It's a blizzard outside and her mom wants her to wait till it subsides, but Rhiannon is quite insistent, so she leaves. Which doesn't work well for her, because her car skids off the road and hits a tree. Trapped and unable to even feel her left leg, she tries to reach her phone but cannot. She thinks of all possible escape avenues, each one failing. As she sits there waiting for help, her mind goes to all the important people in her life and wonders if she ever lived her life well.

Planning to Live is definitely way out of my usual genre. But I still got pulled into it because the themes explored and Rhiannon's character sketch had a more personal connection to me. Rhiannon is goal-obsessed. She plans every detail of her day and sticks to it. So, when a distraction comes by, she doesn't respond well to it. She is the kind of person who believes that doing a task in two hours with no distraction is way better than doing the same task in less time with plenty of breaks. She works too hard, both at work and at home.

She has another problem. She is obese, or so she believes. She wants to lose weight for her best friend's wedding, and enrolls with a dietitian for help. She has drastically reduced her food intake, eats vacuum-wrapped tasteless meals, and works out like crazy each day. Except, none of this is having an effect on her body.

Planning to Live does a very good job of demonstrating the thoughts that go through Rhiannon's mind after the accident. With all the time she has, she wonders about her actions over the past many years. Every once in a while, she picks up her laptop and starts writing letters to everyone, thinking she may not live. And soon after she abandons the writing to go back to her memories. Having planned for every minute of her life, she wonders if she wasted it all - by not living in the present, and by chasing too many goals.

I found Planning to Live quite enjoyable and conscience-provoking. But I didn't enjoy it entirely. I felt that some of Rhiannon's memories dragged on for too long. There were moments that could have been glossed over, since they were just plain non-plot-contributing actions. Also, not being a romance fan, I got really bothered by the excessive romance in the book, but that's just me - it was in no way distracting, but it just wasn't my taste. I should say though that this isn't a romance book, since the romance only features as an element to stress on Rhiannon's goal-making obsession. Still, I found myself turning those pages faster.

The other thing that seriously bothered me was Rhiannon's boyfriend, Andrew, who was too perfect to feel real to me. I know good guys exist, but this one seemed too naive, too nice and too unreal to me. Other than these elements, Planning to Live was written well, and I especially appreciated reading how Rhiannon's thought process was changing on the brink of isolation.

I received this book for free from the author for review.

Heather Wardell said…
Thank you for reviewing my book! I'm sorry the romance elements and Andrew didn't quite work for you, but I'm glad that at least parts of it DID work. :)
October 21, 2010 at 7:17 AM

bermudaonion said…
This does sound like a book that would make you reflect on life.
October 21, 2010 at 3:07 PM

Anonymous said…
I to have issues with the men in romance novels. That perfection is unobtainable - at least I have never encountered a man like that.

It was an interesting review - sounds more thought provoking than the romance novels I have read in the past.