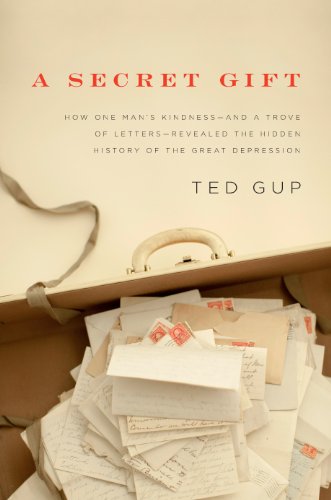 The Depression is one of the periods of this century that I know very little about. Other than reading about it in passing in some books and coming across the tons of references and side-jokes when the current recession hit, I knew almost nothing about it. Sure it was a hard time, a lot of people lost their jobs, but that's probably the limit of my knowledge. Ted Gup's book, A Secret Gift, is a memorial to his grandfather, Sam Stone, whose simple act of reaching out monetarily to a few families during the Christmas of 1933, made Christmas so much more merry for most of them.

Ted Gup accidentally came across a briefcase of letters, when his mother was clearing out a cupboard. Inside it, he found letters upon letters, and 150 canceled checks, in addition to other memorabilia. Reading these letters took him back seventy-five years to an unsolved mystery when a certain B. Virdot promised to send money to 50-75 families. His only condition was that they write to him about their true circumstances. Neither their identities nor his own would ever be revealed. Which would have been honored, until, of course, this briefcase was found.


I began to read through them, beginning with those that looked most legible. They spoke of hunger and cold, of endless searches for work, of dead ends and growing doubts. I was startled by their candor and disturbed by the grim terrain they described.

Ted Gup starts writing in this amazingly captivating manner, that I found hard to put down, even if at 3 in the morning. I hold him responsible for the two times I reported late at work, totally oversleeping on one occasion. Thank goodness it snowed that day. Partly my immersion was also due to my avid fascination with family history. It's immensely satisfying to know more about the people in your family, especially in roles you've never seen them in. Of course, you never want that knowledge to taint their reputation. Ted Gup's discovery only elevates his respect for his grandfather.

Here's another thing I probably assumed wrong about the Depression. My understanding was that most people probably recovered from the slump. Maybe it has to do with me being optimistic during the recession and trying to believe that everyone will come through and that there will be more jobs. Instead, what I learned was that there were many success stories, but there were plenty of not-so-bright futures too. Worse, the effects of the Depression even cascaded a few generations down. Ted Gup not only shared the letters with us, he also tracked down as many of the descendants of the original writers of the letters and gave us some of the what-happened-next as well. I was hooked!

To say that the stories were interesting to read about would be to pass a mistaken impression that they all had happy endings. Because many didn't . They could be plain depressing reading about on their own. Most take on bleak tones. The writers are too proud to publicly ask for help or charity. No one really wanted handouts. They all wanted a job. They might all have slammed doors in B. Virdot's face had he walked up to them and offered a five-dollar bill. But the anonymity of the offer gave them a chance to let out their troubles. What saved the letters from being dreary was they all showed triumph of the human spirit in them. What mostly won my respect was that every letter (at least every one that I remember) mentioned that if they were considered worthy of B. Virdot's check, then they would like to spend it on their family - usually the little children who would otherwise have a very gloomy Christmas.

The timeliness of this novel cannot be better appreciated. While not a Christmas novel at all, it evoked in me all the sentiments that Christmas stands for. The sacrifices, the love, the yearning to give kids a wonderful day even though there is no money for the same. What also surprised me was that most people down on their luck would usually think of saving any extra money they get or using them for emergency expenses such as rent or food. And yet, it warmed me that some just wanted to put a smile on the faces of their kids, make them feel great even if for just one day, by giving them gifts within their means. I can hardly fathom how they must have tried to decide what to do with that five dollar check. We can only guess and assume. As Ted Gup says,


Only in hindsight could one be tempted to romaticize the Depression, to imagine it as a kind of ritualistic purification of the American soul.

Some of those who wrote to B. Virdot were very successful before "The Crash". Overnight, they became paupers. Others were always struggling. The Depression reduced them further. The first to suffer were usually the women. Almost automatically, women were laid off from work. This was an especially hard pill to swallow for those women who were the sole breadwinners of their family - the widowed or the divorced. It was interesting reading how every one of those situations share some form of common ground with Ted's grandfather, the benefactor. But at some point, the repetitive narration got a bit tiresome because of the frequent comparisons, especially since the reader had by then come to look for the similarities him/herself. It didn't help that there were quite a few typos that nagged at me. Ted Gup's book could have done with a better editing.

The second half of A Secret Gift slackens off slightly after the very promising start. Somehow that disappointed me, because once I figured out the whole mystery of why Ted's grandfather did what he did, everything became predictable. Don't mistake me - the stories were very powerful and engrossing, but the direction of the writing didn't hold as much captivation as it did in the initial half. Despite this, the book is very rich in history, with the town of Canton, Ohio, being a major character in itself. To someone like me, who is not very well-verse with the period around the Depression, it also served as a treasure trove of knowledge. In the end, what made this book click was reading about one man who sought to make a difference, however transient, and about the families who yearned to be part of that financial help, though most (probably all) would never have publicly asked for aid.

I received this book for free from the publisher via TLC Book Tours.

bermudaonion said…
My parents lived through the Depression, so I grew up hearing stories about it. It was not an easy time. This book sounds fascinating!
December 17, 2010 at 7:48 AM

Anonymous said…
For some reason The Great Depression is something that I haven't read much about either ... I wonder why that is? I've been hearing great things about this book though - I'll definitely have to make time to read it, and soon.

Helen's Book Blog said…
I heard about this on NPR; so interesting! I am glad to hear the book is captivating. Add another one to the TBR list
December 17, 2010 at 2:31 PM