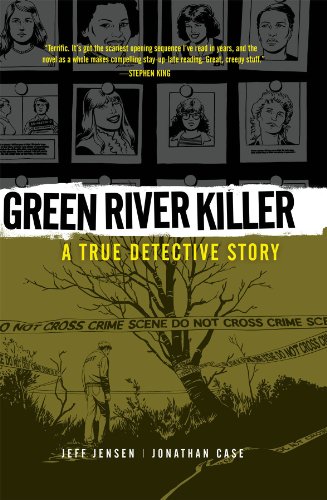 Early last month, there was a new graphic nonfiction book getting a lot of buzz. It's very rare that I see non-comic graphic books getting some much needed hype, so I was quite thrilled to see Green River Killer featured. But I wasn't very sure about the subject itself. I prefer reading non-graphic nonfiction about true crime, I wasn't sure how the graphic medium was going to handle that. How sensitive would it be? Words in reference to psychopaths can make me queasy, but pictures, even more so. Sometimes, it helps to be judgmental when you read - seeing the picture of a tragedy breaks open some vulnerable part in you, and can affect your perception of an incident. With pictures, there's usually only one side that's presented. Even in writing, it's hard to present two sides justly. Not that there's anything just or right about killing - but to understand why a killing happened, I find it necessary to understand the killer himself. But I needn't have worried much - this book was less about the killer and more about the detective who took charge of the investigation. And in that respect, I think the writers/illustrators did a genuinely wonderful job in bringing forth a lot of emotions and issues related to the case.

Green River Killer is, as the title says, about the Green River Killer, the serial killer who raped and murdered a possible 90+ women, many of them prostitutes. Most of the murders occurred between 1982 and 1984, and the bodies were disposed off in the Green River area in Seattle, hence the name. The killer, Gary Ridgway was arrested twice on charges of prostitution, but no one had any concrete proof to link him to the killings. When, finally, DNA technology made it possible to conduct more reliable tests, Ridgway was formally arrested and charged with seven murders. However, Ridgway came forward with a plea bargain - he will lead the detectives to the bodies of as many of his victims as possible. Rather than give him the death penalty for seven solved murders and leaving the remaining dozens of mysteries go unresolved and the victims' families without closure, the State Prosecution decided to spare him the axe and get as many answers as they could. Green River Killer is the story of that investigation, particularly from the viewpoint of detective Tom Jensen, as told to his son Jeff.

The book slips back and forth in time, almost unobtrusively - in the present, the detectives are interviewing Ridgway, who isn't exactly having any significant detail or evidence to share. The images set in the past almost always follow the fruitless investigation and the immense effect it has on Tom Jensen. Following a true detective "story" on graphic media was an interesting experience. Some of the guys had been working on the case for years. Jensen had been on it right from the start and following the progress on the case was like cheering on an embattled fighter in a ring, or the valiant underdog team in a high-stakes game. You just wanted him to nail the guy, and go home to enjoy his retirement. But it wasn't easy. What he expected to take "no time" at all, took almost twenty years. During that time, the years catch up on Tom Jensen, though he remains as charismatic as ever and still smoking many cigarettes a day, after having promised to give it up when the case is finally solved. In all these years, he remained the primary investigator in the Green River killer case, which pretty much overtook every aspect of his life.

This book is as much about the detective process as it is not about the killer himself. And that's where I was slightly disappointed. Ridgway was shown as mostly the killer he is with not much remorse or back story. What we hear about him is what's mostly in the public domain already - his troubled childhood, his compulsion to conquer in sex and death, his fascination with committing necrophilia and difficulty to resist it. Although I hoped for a little more insight into this man, this wasn't the book for it, as the writers also made it clear. Still, that's not to say that Ridgway was portrayed as one-dimensional. There are times you can actually see some feeling in him, while you're trying not to feel that sensation of your skin crawling when you look at his pictures. I hated it when he tried to justify his killing habits by saying that he was doing a good thing for the country by ridding it of prostitutes. On the other hand, he loved his wife (his third), and even liked one of the women he killed. When he was trying to provide evidence to the detectives, it was hard to not feel sorry for him while he tried to recollect his memory. The detectives kept accusing him of how they would never forget it if they did something of this magnitude. My guess was more that raping and killing was such a routine exercise for him that it wasn't hard for him to forget the details.

Green River Killer was very thought-provoking and well-done. It had the right amount of mystery, intrigue, and humanity added to the illustrations. The black and white sketches also gave the book a dark gothic tone, well in sync with the tone of the story itself. This is yet another fabulous graphic book that I will strongly recommend to you guys. It's far less disturbing than it might be reading about the killer, and the crime itself is never exploited in graphics - giving it just the amount of truth and sense of tragedy as is necessary, but the people's emotions and reactions lend the tragedy the rest of the weight.


I received this book for free for review from the publisher, Top Shelf Productions via NetGalley. Green River Killer was published on October 11, 2011.

Jess M. said…
This sounds really good. I've always been interested in crime shows (not so much crime novels), but the fact that this is done in a graphic format really intrigues me. Great review!
November 12, 2011 at 7:47 AM

bermudaonion (Kathy) said…
I used to read a lot of true crime books and wondered how this would work with the visual representations.  It looks like it's well done for the most part.
November 12, 2011 at 7:58 AM

Helen Murdoch said…
This sounds so interesting and fits right in with the type of books I've been reading lately. I'll add it to my list of books to check out.
November 12, 2011 at 2:06 PM

AnneBennett said…
How long is the book?  Since I live in the Seattle-area we are very award of the Green River killer and his deadly rampage. Did you learn much from the book or was it a rehashing of what you already knew?

c b said…
I am not really into graphic novel, but am into true crime. May keep this one in mind if I am in the mood of graphic novels! christa @ mental foodie http://mentalfoodie.blogspot.com/
November 12, 2011 at 3:14 PM

Athira / Aths said…
I hadn't heard about this killer, so everything I learned, came from this book. After reading it, I checked the Wiki and found pretty much the same info on the killer. However, this book is more about the investigators, and that information isn't available online, so for that reason, I would strongly recommend this book.
November 13, 2011 at 2:18 PM

Shelleyrae @ Bookd Out said…
Hmm, I am glad you enjoyed it it seems an awfully odd concept to me to have a non fiction true crime in graphic format.
November 14, 2011 at 12:54 AM

Five-Eyed Bookworm said…
I've included this in my TBR list for the Graphic Novels challenge next year. I was intrigued by the story... Also, I love reading mysteries and thrillers. Looks like I won't be disappointed :) Thanks for the review!
December 27, 2013 at 7:32 AM