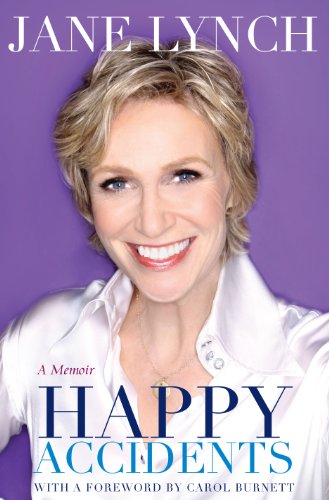 If I could go back in time and talk to my twenty-year-old self, the first thing I would say is: "Lose the perm." Secondly I would say: "Relax. Really. Just relax. Don't sweat it."


I don't usually read celebrity memoirs. For one thing, I don't follow anyone so much that I want to know their life history. Okay, there have been times when I have had this insane schoolgirl crush on some handsome actor (anyone remember the Leonardo DiCaprio craze following Titanic?) but with time, I've come to feel respect for them and nothing more. The other reason is that I don't watch so many TV shows or movies to be able to relate to any showbiz talk. So Jane Lynch's Happy Accidents was a first of sorts for me. I don't think reading this memoir is going to make me more eager to try other celebrity biographies, but I'm glad that I tried.

I wanted to read Happy Accidents because I love Jane Lynch's role in Glee. I don't think I've seen a more malevolent, cruel, racist and yet sensitive, and funny (without meaning to be) character on screen. That's a deadly combo and would be too hard to pull off, but Jane Lynch does it well. So many of her quotes have become near-pop culture (at least, I like to say that). And I wanted to read more about her, because here was an actor who looked as next-door-neighbor-like as was possible.

In Happy Accidents, Jane Lynch talks mostly about her career and her personal life. If you read the first few pages and the last few pages, you can really see that her life has changed drastically. At 14, she yearned to be actor, only to quit a school play out of fright. When she realized that she was gay, she knew that she could never ever tell anyone about it, fearing that it was bad to be so and that people will mock her. By the end, it's amazing how she has catapulted to being a very popular actress, and happily-married to a wonderful woman who she totally met by chance.

What I loved most about this book was that Jane didn't rattle off Hollywood facts and figures or talk so much about Hollywood in itself that I was able to read the book as a regular memoir. Sometimes, you could even be fooled into thinking that Jane Lynch wasn't a popular actress, if you didn't know it beforehand. Even though, I didn't know all the movies/TV shows she had acted it, it wasn't hard following her growth from acting in theater to getting some regular jigs.

But what I loved reading the most was about her personal life. Her relationship with her friends, girlfriends and boyfriends, and how she kept pushing off people and struggled with getting closer to them. Jane also talked about her homosexuality and how she stayed in the closet for a long time, because of her reluctance to embrace or accept it, even though one of her closest friends in high school was also gay; and how she began to distance herself from her family gradually because she couldn't come to admit it to them.

In a nutshell, I enjoyed this memoir. It was an easy read and funny in spots though not reminiscent of Sue Sylvester (because of course, Jane Lynch is so much nicer!) There are a lot of pictures scattered through the book spanning Jane's life from when she was very little to her more recent photos with her wife. There were some repetitions that bugged me occasionally, making me think that the book could have done with some good editing. I loved some of the stories that Jane shared from her life, and appreciated that she didn't get all preachy on the reader, but only stuck to what worked for her. But mostly, I appreciated her honesty in sharing even her innermost fears and desires, and some very embarrassing mistakes without trying to sugarcoat things on paper.


I borrowed this book from my library.

Helen Murdoch said…
I love Jane Lynch, I think I'll see if the audio is available on iTunes then I can listen to it while I drive to and from work, thank you for the recommendation!
November 3, 2011 at 8:07 AM

Laurel-Rain Snow said…
This one sounds like one I'd enjoy, and I don't even watch Glee.  But I've seen Jane Lynch in other things...and I love her thoughts about looking back to her 20-year-old self.
November 3, 2011 at 8:45 AM

Nina Happyendings said…
I don't read a lot of memoirs and I only now this actress from Glee. ;) lol. So? So, this is not the right book for me. But I'm glad you really enjoyed reading this one.
November 3, 2011 at 10:41 AM

zibilee said…
I don't watch Glee, but have seen a few clips of Lynch's quite famous character. It sounds as if this is a really human story about a woman who doesn't see fame as the only outlet to her life. I might want to read this. I don't really know her as an actress, but her life story sounds interesting and like something that I could get invested in and learn from. Terrific review, Aths!
November 3, 2011 at 1:39 PM

MedeiaSharif said…
I haven't read a memoir in a long time.  I used to love reading them, celebrity ones included.  This one looks interesting.  Thanks for sharing.
November 3, 2011 at 5:44 PM

Vasilly said…
This sounds like a really good read! I don't ever read celebrity memoirs but this sounds too good to pass up. Great review!
November 4, 2011 at 3:03 PM

Lenasledgeblog said…
I think Jane Lynch's character is one of the best on tv, just when you want to hate her, she shows a little heart.
November 4, 2011 at 7:00 PM