The Secret of Lies by Barbara Forte Abate 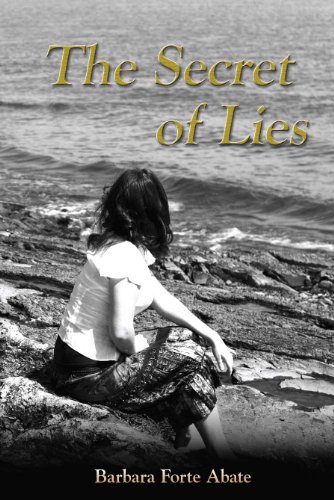 Eleanor had no use for the card catalog, firm in her opinion that a novel was only as good as its cover. Roughly translated, it meant that any book featuring a portrait of a wildly handsome couple with untamed hair and torn clothing on its jacket more or less cinched its assurance as world-class literature, and she missed few opportunities each summer for cramming her mind to saturation with such classics.


When The Secret of Lies begins, we find Stevie Burke abandoning her home, husband and a contented life heading to nowhere specific - she hasn't figured that out yet. All she knows is that she has to address the demons of a past that is slowly but surely overwhelming her. A past that begins from when she was thirteen, and culminates to a horrible tragedy when she turns fifteen. Every summer until that tragic year, Stevie and her sister Eleanor would travel to her uncle and aunt's summer house in the North Atlantic coast for a fun-filled summer. It is during one of these years that they meet deaf Jake, who becomes their good friend. Over two years, however, feminine discoveries and desires catch up with the sisters, until in their last year at the summerhouse, things get out of hand for one of them.

When I first started reading The Secret of Lies, I realized that this isn't my usual fare. But, interestingly, it also turned out to be hard to put it down. I found this book more engrossing than I expected it to be. Something happened to Stevie when she was fifteen, and although it took a long time for that to be revealed, the character developments in the meantime were fascinating. At one point, way before the tragedy, I could already see where this was going, and it even surprised me that the characters allowed it to continue.

The story is told in a mostly linear form, with just the beginning chapter set in the present. I found myself judging Stevie too harshly at the start. Her thoughts appeared to me too rambling and confused, and I couldn't quite figure out why she finds it necessary to leave home. I can't say that I understood it any better in the end, but at least, by then, Stevie turned out to be less one-dimensional and more dynamic than she was at the start.

Although the story is told from Stevie's point of view, the other characters get center-stage opportunities many times. Barbara's writing is very beautiful - that's one of the reasons I found the book very intriguing. Occasionally though, it slips into an overly formal mode that makes it awkward hearing the thoughts of a thirteen-year old girl. Still, that was just few and far between. I felt that some times the buildup to some event was too long and obvious, and the events in between felt too trivial to be written about.

Still, I was glad that I didn't let my taste preferences interfere, because The Secret of Lies was quite enjoyable. My copy had quite a few typos that did bug me, but reading this book was mostly a breeze - I probably finished it in two nights. A nice debut book from the author!


I received this ebook for free for review from the author.

Ti said…
Something about the cover turns  me off. I typically enjoy novels like this one where there is a secret or something horrible that happened to the protagonist in the past but for some reason I am not drawn to this one. I think I'd have to read a few pages before making the decision to dive in.
December 8, 2011 at 2:39 PM

Helen Murdoch said…
Sometimes it feels so good to break out of our normal reading pattern and we surprise ourselves when we like the experiment. That's what happened with me and dystopian fiction
December 8, 2011 at 7:46 PM

zibilee said…
You give just enough information and hints in your review to titillate and entice me into adding this one to my list, though I hadn't heard of it before. I am glad that you enjoyed it, and if you read the whole thing in two sittings, I bet that I will probably like it too! Great review today, Aths!
December 8, 2011 at 9:29 PM