I'm so glad it's Friday - has it been a ruthless week so far? I barely slept two nights in a row, thanks to some issues in the personal life and then I slept in really long today and that's made me happy. We're also expecting some bedroom furniture delivery today, which has me very excited.

The Estella Society is hosting the Dog Days of Summer Readathon this weekend, and although I'm not very sure of how much reading I may get to do, it's been a long time since I've done mostly reading on any day, week or month. It would be nice to drop everything and just read. I just need to stay away from the computer. I don't have any stack I would like to rip through, but I'm hoping to find more books like the one I'm currently reading, The Boy Who Could See Demons. 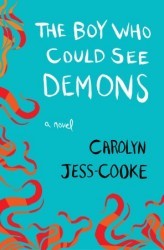 Speaking of which, this book is seriously amazing. It's about a boy, Alex, who started seeing demons ever since his shady father "died". He and his mom live on government welfare in Ireland, where much of the population suffers from the first or second hand impact of the fighting over there. However, his psychiatrist, Anya, believes the boy has schizophrenia, which may well be true. Except the boy knows so many things about Anya that she had not yet divulged. It's wicked awesome so far and I'm tossing between the idea of schizophrenia and real demons. If it really is schizophrenia, then the author has done a splendid portrayal of Alex's mind. Anyone in Alex's head can't help but believe that the demons he see are real and genuine.

I've been reading The Boy Who Could See Demons on my ipad/phone kindle app. The phone app has a cool new feature that calculates my reading speed and then tells me that I can X minutes left in this chapter - that's a really cool way to find out if I can really squeeze in a chapter during my lunch break or at the checkout line in a supermarket.

Couple of weeks back, I started reading Rahul Mehta's Quarantine at the B&N store here. It's a book of stories about gay Indian-American men and I breezed through the first story before I had to leave the store (after buying the book, of course). That first story was definitely engrossing and if I'm in the mood, I may try to read the rest of the book this weekend. It's been on my wishlist ever since I saw it on many blogs.

I'm not sure what's next on my to-read list. More than half of my books are on the floor in the office room because we sold the bookshelves we had, with the full intent of buying more matching bookshelves. Except now that I have room for them, I don't know what kind of shelves I want. We bought a short cubed shelf, assembled it and put it up in the office room, only to be disappointed that it looked so tiny in there. So we moved it to the area in front of our patio, which was the husband's idea, and it looked perfect in there. I'm planning to add a colorful armchair next to it and a fur-like rug in front to convert it into a reading nook. I'll post pictures once it's done - having been through a big furniture purchase, I'm trying to pace out the next purchases.

I definitely need a bookshelf first though - my to-read list is getting messed up.

Jennifer Hartling said…
Hope your personal issues resolve themselves/get better! Have fun putting together your reading nook :)
August 17, 2013 at 10:20 AM