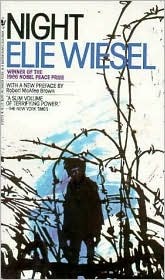 I learned after the war the fate of those who had stayed behind in the hospital. They were quite simply liberated by the Russians two days after the evacuation.


Elie Wiesel is not a new name in the book world. I don't remember when I first heard of him - all I know is that as soon as I started following the social world of books, everyone thrust Night at me. When I heard words like moving, amazing, profound, associated with this book, I imagined a hefty volume filled with lots of sad notes. When my copy arrived at home by mail (few years back), the size raised my eyebrows - this book is real slim! And finally, when I got to it early this year, I was even more surprised that although this book is sad, it is not in the written-to-make-you-cry manner.

Every time I read a Nazi concentration camp book like this one, I end up wondering how I would have fared, had I been born Jewish in Nazi Europe during WWII. It's a hard pill to swallow - every book I read amplifies the image of the torture in my mind manifold. Each time, I end up feeling that I know enough about this era, but the next book comes along to prove me wrong. What saddens me the most is the parts where people helplessly watch their own loved ones die, unable to do anything about it. I'm the fiercely protective and willing to fight person when it comes to people I love, so a situation that leaves me unable to do that is pretty hard to read about.

Night is Elie Wiesel's account of how the Holocaust impacted him and his family. Wiesel, who grew up very devout, is tormented by memories of the war and cannot understand why the God he loves would steal his family from him in so cruel a way. He talks about how he ended up there, how he and his father stayed with each other and how fate had different plans for them.

This is not my first experience with Wiesel. His eloquent phrases and thought-provoking stream-of-consciousness will make any reader think. I usually don't enjoy stream-of-consciousness books. But the first book I read by him, The Sonderberg Case, was full of it and it still managed to blow my mind completely, so much so that you can see it on the right side of my blog as a WOW! book. He has a way of raising even the most obvious points in a very new perspective. Even if you know how Night ends, you will root for Wiesel and his father throughout. Without giving word to his emotions, he makes his feelings clear. He talks about oh-crap moments with simplicity and no resentment but as a reader, I said oh-crap. He talks about the tragic moments very matter-of-factly, but as a reader, I cried for him.

As soon as I finished this book, I bought the next two books in the trilogy - Dawn and Day. I was disappointed to find that they weren't really Wiesel's account during the war but more fictional stories revolving around the same themes raised in the first book. Still, Wiesel's writing is pretty hard to resist so I hope to read them soon.


This book is from my personal library.

rhapsodyinbooks said…
I saw him last year and he still seems pretty devout. I can't understand it myself!
October 10, 2013 at 6:47 AM

Helen Murdoch said…
Night really is one of the best Holocaust memoirs out there. Most of our students read it in 10th grade (World Lit) and it is a rare student that doesn't find it interesting or profound.
October 10, 2013 at 4:19 PM

techeditor said…
I read this, too, a few years ago. I didn't write a review of it at the time, which irritates. My reviews help me remember. I can't say I was much impressed. I know that may not be the best thing to say about a Wiesel account. But I've read so much fiction and nonfiction about the Holocaust Holocaust over the years that this didn't stand out as all that different.
October 11, 2013 at 3:54 PM

Anna @ Diary of an Eccentric said…
Great review! I was blown away by this book because it was, as you say, sad but "not in the written-to-make-you-cry manner." It was really thought-provoking. I haven't read the rest of the trilogy because I'm worried that being more fictional would detract from this book, so I'm really looking forward to your thoughts on them.
October 14, 2013 at 9:45 AM

Athira / Aths said…
I don't think I can either. I would love to meet him someday though. His writing resonates pretty well with me.
October 16, 2013 at 7:24 PM

Athira / Aths said…
I wish I had read it sooner. It would be one of those books I would have recommended to many. Still, better late than never.
October 16, 2013 at 7:24 PM

Athira / Aths said…
The other two books in the trilogy are fiction but I believe they follow the same themes and questions. I will be eager to hear what you think.
October 16, 2013 at 7:26 PM

Athira / Aths said…
I can see where you come from. Once I've read too much of a subject, further books pale in comparison. I usually have that happen with Holocaust books but luckily, this one avoided that.
October 16, 2013 at 7:31 PM