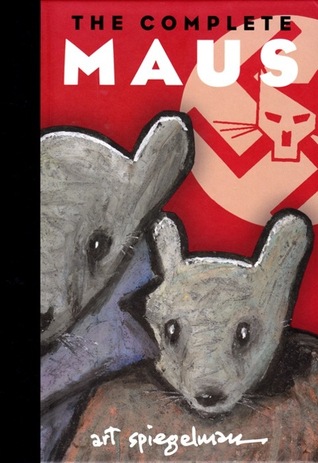 I first read Maus in March of 2011. I remember approaching it with some trepidation - after all, this book is in a lot of lists and has even won the Pulitzer. What if I didn't get the "greatness" of this book? When I finished it, however, I loved it. This book blew my mind in a way no other graphic book did but when I sat down to review it, I couldn't for the life of me string two words together to form a coherent review. I eventually decided not to review it. Some books are great, and it is enough to say that.

Last year, I reread Maus. That's rare for me - I rarely reread and if I do, it is always the Harry Potter books that get that honor. So I'm not sure what made me want to reread this one, though wanting to read Metamaus after, may have something to do with it. I reread Maus and rediscovered how amazing this book is. Again though, I couldn't put a review together to say all I wanted to. But I'm giving it a try this time.

Maus is a graphic memoir/biography written by Art Speigelman about his father's WW2 experience and Art's years interviewing his father for the details. Art's father, Vladek was a Holocaust survivor, who managed to survive the unspeakable horrors with his wife, Anja. They lost their first son, Richie, to the genocide - the son who was now a photo on a mantel, and was often this idea of a perfect son causing Art to bristle at that. Art was born after the war and had no idea of the profundity of the life his family led before the war though he knew that they were survivors.

Maus is both Art's and Vladek's story. On the one side, Art narrates his father's story, as told to him by his father, beginning from his marriage to Anja to the end of the war. Theirs is a story of intense suffering. After managing to ride out the initial calls to camp, they were eventually brought to Auschwitz, where they were separated, each with no idea of whether the other had survived.

On the other side, in listening to and narrating Vladek's story, Art begins to feel several negative emotions. He feels that he didn't achieve much, considering everything that his father had been through. He feels annoyed that he is not a Mr. Fixit, while his father has an innate knack for how things work. He cannot stomach his father's miserliness, even though his father learned to stock and hoard after seeing the value of things in WW2. Art also gets bouts of depressions while he wades through his father's recordings and looks to a psychologist-friend to help him out.

During my second time with this book, I found some sections I didn't recollect. Part of it is because who remembers everything about a book? But part of it is also because every snippet in the book contains several layers, and it generally takes several rereadings to get it all. I even reread some sections a third time while reading MetaMaus, and found even more things to wonder about. This isn't a complicated graphic book. But it is a very well-made one with only the important stuff jumping at you at first read and then more elements of the situation becoming obvious on rereads. Art's use of animals to characterize in Maus is now legend. And in MetaMaus, he explains more about why he did that. It wasn't hard at all to look behind the mask and to empathize with the suffering mouse.

There is so much about Vladek that is endearing. A lot of his personality was born through his experiences in WW2. As Art mentions once, I did feel that Vladek was incredible lucky as well. He was resourceful, and had a few useful talents and contacts that helped him a lot at Auschwitz. Still, that is not to say that he didn't suffer. His wife wasn't that lucky, but she thrived in her own way. They both lose a lot though. There are some truly heartbreaking scenes in this book, such as when Vladek's father was registering to get papers along with other Jews, he decides to skip over to the "wrong side" to join his daughter and her four kids when he saw that they were going to Auschwitz.

If you haven't read Maus yet, you absolutely have to. Whether you read graphic books or not, whether you are tired of WW2 stories, whether the mouse and cats in books bother you, Maus is a book that is very accessible, moving, tragic, and empowering.

rhapsodyinbooks said…
I read this quite long ago so I don't remember it much except that at the time, I wasn't so into graphic novels. I still am not, but I appreciate them more than I did, so maybe I should reread it also!
January 14, 2014 at 5:57 AM

bermudaonion(Kathy) said…
I've wanted to read this for a while and have even looked for it at the bookstore once or twice. I guess I'm going to have to break down and get them to order it for me.
January 14, 2014 at 2:20 PM

Anna @ Diary of an Eccentric said…
I read Maus a couple of years ago and was blown away by how powerful it was. I'm going to have to look for MetaMaus. Great review!
January 14, 2014 at 4:48 PM

bellezza said…
It's interesting to me that such a serious topic is handled through a graphic novel genre. Perhaps it helps assuage the horror a little bit? I can't imagine the difficulty of even writing such a thing, and your review is powerful enough to let me know that I don't know if I can manage reading this book. I went through Anne Frank's house when I was a child, and it showed me the horrors of war in such a clear way I've always been quite sensitive to it...even more so now that my own son is a Marine.
January 14, 2014 at 5:05 PM

Lisa Sheppard said…
I've been thinking about this one a lot lately; thinking I want to try to break my book club into graphic novels with it.
January 14, 2014 at 9:26 PM

Athira / Aths said…
I don't think that it assuages the horror at all. At least I didn't feel it. As you read, you stop looking at the characters as animals, and more as people like us. Plus, despite the story being drawn, there is still as much emotion and tragedy in it.
January 15, 2014 at 3:10 PM

Athira / Aths said…
I think this will be the perfect introduction to graphic novels for your book club or any newbie. Even though it is all pictures and conversations, it is just as readable as a non-graphic book.
January 15, 2014 at 3:11 PM

Five-Eyed Bookworm said…
This is a graphic novel I'd really love to read one day. I hope I can finish my 12 graphic novels for a challenge this year and move on to this one.
January 18, 2014 at 3:41 AM