The Free by Willy Vlautin 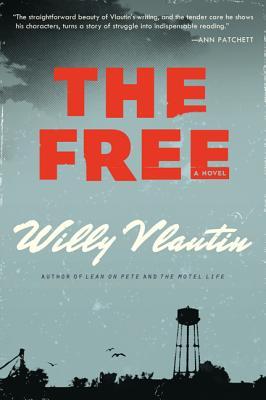 Even with mortgaging their house they fell behind on those payments, and then his wife had to quit working to take care of Ginnie. They began to drown. Now after four years he was left with a total bill of nearly seventy-five thousand dollars.


Leroy Kervin is an Iraq war veteran who returned from the war in a coma and had to be admitted to a group home to be taken care of. Seven years later, he woke up with a clear mind. Suspicious of the clarity and believing it to be a trick, he decides to commit suicide. Freddie McCall finds him severely injured and takes him to the hospital, where he visits him often. But Freddie has issues of his own - a friend leaving for the prison has moved a marijuana garden to his basement and Freddie is worried about being found out. His routine is awfully similar day after day - work at the group home at night and a paint company at day, with just a brief two hour stop at home between jobs. Pauline Hawkins works at the hospital where Leroy is being treated, and while she takes amazing care of her patients, her own life has nothing major to look forward to. She lives alone with her rabbit Donna, and spends most nights watching TV and some days visiting her mentally ill father.

The Free is an amazing book - very fast to read, with a very engrossing plot. Even though the lives of the characters were significantly different from mine, I found myself warming up to them and really liking them. They all had very real problems - problems that are sometimes subtle and oftentimes tend to get buried under the carpet. Leroy has been in and out of coma and has returned from the war a very different man. After his attempt to commit suicide, he flits in and out of consciousness. His dreams follow a long sequence where he is running with his girlfriend from military people, who are killing people with strange green/purple marks on their body. His dreams are clearly a manifestation of the life that he has been leading post-war, in that the taints of war never leave you and leave indelible marks on your person.

On the other side, Freddie is thiscloseto losing his house, thanks to his mounting bills and two not very high paying jobs. He is dedicated, however, to his work and never once complains about his abysmal state. Every person he comes across worries about his ill health, but Freddie brushes the concerns off and is ever so helpful to them. When his friend starts to harvest marijuana in his basement, he is worried, but the money he gets for complying helps pay off his bills. His daily cause of sadness however is that he sees very little of his daughters after they were taken away by his wife when they split. Pauline has similar problems. When a girl is brought to the hospital with abscesses in her leg after heavy drug use, Pauline takes an instant fancy to the girl and helps her through the ordeal. She identifies a lot with this girl - both alone, both craving human connection but making all the wrong choices. But the girl doesn't really want to be helped. No matter how much she admits that her situation is bad, she keeps going back to it.

Willy Vlautin tells a great character story. There is not one place in the book where he tells what his character is feeling or worrying about. His lets his narration and his story give us a measure of his characters' emotions. The reader knows everything about the characters through their actions. This literary device worked really well because it places the reader directly in the shoes of the character and depending on the kind of person you are, you will have your own conclusions about each character. You may empathize with them or pity them. Moreover, he doesn't pass judgment on his characters' actions - they do what they can, whether it is right or wrong. Most of the times, their circumstance drives them to do certain things, but he tells it very matter-of-factly that we do not question it.

This isn't a book that masks problems and tries to give everyone a happy ending. The problems are real, no matter how profound. What I loved about this book is that the issues that the characters face could very well be faced by any number of people I see everyday. They are not the problems that get debated about in council meetings or the Congress or even in the news. These are generally the invisible problems of the world that everyone seems to have. Vlautin tells their story so profoundly in The Free that their problems become our problems too.

HeatherTLC said…
Wow, this sounds like a book everyone can relate to and one that shouldn't be missed.

Athira / Aths said…
It wasn't so sad that it bugged me too much. Mostly it was thought-provoking. It really made you think about the people you probably see everyday but don't think too much about and how they have problems on a daily basis.
March 3, 2014 at 5:51 PM

Lisa Sheppard said…
And this book is exactly why book blogs are important - I would entirely have passed over this one by the cover and blurb. And I would have missed what sounds like a terrific book!
March 9, 2014 at 11:34 AM