The Snowman by Jo Nesbø 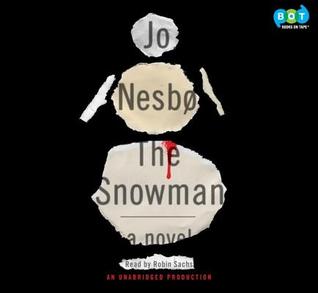 In order to isolate what was possible, you had to eliminate everything that was impossible.


Holy crap! What took me so long to read a Nesbø book? Oh yeah, I thought the suspense was going to be the everyday run-of-the-mill type which ends up either being so far-fetched that the mystery focuses on Alan, Becky, and Charlie, and then ends saying that Zooey, the cleaner in Chapter 1 was the murderer. Or, it would be so obvious from page 1 who the bad guy was. Or, it would be the mix of both - the author would play hard at making it look like Alan was the bad guy, so hard that it would be obvious Alan was not the bad guy.

So although I have been hearing plenty of praise about Jo Nesbø's books, I didn't really TBR any of them until I had to pick an audiobook for a road trip. Into my car stereo, I popped The Snowman and waited until the moment I was going to feel justified. Nada. Never happened. Nesbø had me right from the page one. It was really hard to stop the audio each time I reached my destination.

The Snowman starts off with a suspenseful premise. A boy and his mother stop at a house on their way back to home. The first snow of the season has fallen. The woman tells her son to wait in the car for a few minutes. The few minutes turn into more than an hour as the woman is actually meeting her secret lover. At one point, she and her lover see a snowman glaring into their bedroom. When she finally gets back to the car, clandestine actions over, she finds that her son has been sitting in a freezing car. They drive off, but her son is suddenly very worried. He thinks that they are going to die.

I have read that Nesbø's books usually start with a prologue that he eventually ties in with the plot, towards the ending. So I was curious to see what role this incident had to play. When it finally came, it was just jaw-dropping. How the same scene can be played from multiple perspectives! I'm a big fan of writers who can play that trick well - everyone doesn't see the same thing when they look at a picture. It is amazing to see how different people can project their bias and baggage onto a picture and form opposite conclusions.

In The Snowman, women have been getting murdered or going missing and a snowman seems to always be at the scene. The killer thus gets the moniker of The Snowman. To the reader, there is a hint of a connection between these women, but to Harry Hole, the detective, there is none. The eventual conclusion isn't arrived at easily. There are a lot of things to figure out before getting there, and Nesbø takes his time, planting clues, snatching them away, and turning the picture around. By the end of the second disc, I thought I had the scenario fully figured out, but that scenario morphed a lot before the killer was revealed (who wasn't anyone I guessed but not so much of a non-entity that it was improbable).

The detective, Harry Hole, is clearly brilliant. But he is missing his ex-girlfriend, Rakel, who had just started seeing a doctor, and her son, with whom he shares an excellent relationship. That doesn't stop them from having an affair, though. The murdered victims described in the book have obviously been through a very torturous experience, but what is a crime thriller without some gory scenes. Harry Hole works on the murder cases with another inspector, Katrine Bratt, who seems to be a mystery - her actions and her private life do not seem to go in sync, but it takes a while before any of it comes to light. There are several other minor characters in the book whose presence I enjoyed and a few that gave me the creeps.

This is apparently the seventh book in the Harry Hole series, but I had no trouble reading it nor did I feel as if I missed any references. Knowing that there are 10 books in this series so far thrills me to bits, more so because I don't really like reading thriller novels and when I find one that I enjoyed, it's great to anticipate more such books. I listened to this audiobook and the narrator, Robin Sachs, does a fabulous job of narrating the story. He places all the right pauses, inflections, and stresses that it sounded very genuine to me.


I borrowed this audiobook from the good old library.
Armchair reading in Norway

rhapsodyinbooks said…
This one was probably my least favorite in terms of how much violence there was! But it was still quite the fun roller coaster ride, and they keep getting better after this one! And yes, I love love love how he ties in the beginning with the end!
March 20, 2014 at 7:39 AM

Ti Reed said…
Holy Crap, is the only way to start a review for this one! I have ready nearly all of the books in the series now, I think I am missing one, but this was by far my fave and the one they made a movie of, although I don't think the movie has come out yet.
March 20, 2014 at 11:02 AM

Tea Time with Marce said…
Hey Aths, what an amazing review. I haven't read a review of this one in years, it has been on my Wishlist a long time. I love thrillers but wasn't sure if this will be similar writing to the Girl with the Dragon Tattoo, couldn't complete that but I'm intrigued again.
March 20, 2014 at 3:04 PM

Sam_TinyLibrary said…
I'm not into mysteries/thrillers myself, but I've heard good things about this author. Great review!
March 20, 2014 at 3:20 PM

Athira / Aths said…
If this was your least favorite, I cannot wait to read the others. I have heard one other person say the same. I will have to look for the remaining books!
March 20, 2014 at 6:05 PM

Athira / Aths said…
I thought they dropped the movie of this one. Martin Scorsese was supposed to make it.

Ti Reed said…
You're right. I just checked and it said that Marty Scorsese bailed on it. The article said that Universal is still looking for a director.
March 20, 2014 at 6:20 PM

Gwen said…
I am so glad that you liked it! I got hooked. The first of his books that I read was the Devil's Star and have been greedily reading them as they become available to the US (in ebook format) ever since. And you are right, with any of them, it isn't vital that you start at number one of the series to "get it".

They are finally starting to release the earlier books in the series, but I have to give you a word of caution.....(insert instrumental dum, dum, dummmmmmm here) I read The Bat earlier this year (the first in the series) and if that had been my first exposure to Harry Hole, I don't think that I would have been so in love with the character or the series. (Which makes me wonder if that was why they have released them to the US all out of order like they have)

niranjana said…
I've seen this everywhere and never quite convinced myself myself to pick it up. So maybe i'll give it a go now!
March 24, 2014 at 6:24 PM

Nishita said…
This is really very good, isn't it. I loved the concept of The Snowman. I also read an earlier book in the series called The Bat. You can skip that one, it's not bad but I get the feeling the later books are better.
April 4, 2014 at 8:29 AM