The Girl with all the Gifts by M. R. Carey 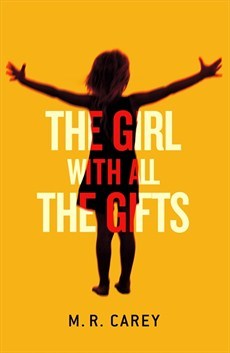 You can't save people from the world. There's nowhere else to take them.


The Girl with all the Gifts starts with a very intriguing and scandalous premise. A bunch of kids are waiting in their individual cells for something. Pretty soon, some soldiers walk in to each kid's cell, with one pointing his gun at the kid's head, and couple of other soldiers strapping the kid to a chair. Hands strapped, legs strapped, even the kid's neck is strapped so tight that there is no room for movement in any direction. Once everyone is happy with the arrangement, the kid is wheeled into a classroom, into which more kids will be brought soon, using the same routine. Then class starts.

That was just the weirdest beginning to a book I had read in recent times and I had to know what the deal was with all the mystery and security. There is some hinting of a breakdown that happened a few years back and the current location having some scientists who are busy trying to do some research. There is also plenty of mention of zombie-like creatures, called hungry in this book, because of their insane appetite for humans. (Seriously, that sounds just like zombie to me, and the word hungry took a lot of getting used to.) But the full picture isn't revealed immediately - the story is slowly told in layers, leaving enough mystery to have you reading through to the end.

About a quarter of my way in, I did start comparing this to other zombie novels. There is only so much variety in this department, just like in many of the paranormal books. I was quite bugged by it. I am not one for reading the same kind of books - I like my books to be fun, quirky, and innovative, not steeped in conventions. Luckily, a little after that, things started becoming more obviously different. The titular girl in this book is one of the cell-girls, Melanie. She has quite an inquisitive mind and absorbs a lot of what happens around her. She doesn't quite question why she is being imprisoned though - having grown up like that, she has just taken it for granted. But something happens shortly that soon sends her into denial.

Very early on, I knew what Melanie was. But what intrigued me more was how she could be so different from others of her kind. Now that's where this story takes a completely less treaded path. You don't really learn much about it, until the very end but there is enough suspense to go on till then.

It is a good thing that the story was very intriguing. Because the writing wasn't. The author started off very well, but much of the last three-quarters of the book could have done with a thorough editing. There is a lot of repetition and focus on irrelevant stuff. I also thought that a single narrator would have worked better for this book. The different narrators were focused on with different levels on intimacy - some talked mostly about what they were doing, some others talked mostly about what they were thinking. This inconsistency meant that by the end, I didn't really know anyone well.

If you read a book without knowing who the author was, would you be able to guess the gender of the author? I had no idea who M. R. Carey was and learned later that it is a pen name for Mike Carey. But even without knowing that, I could have told you that this book was written by a male. There is plenty of sex talk in the narratives of the male characters and zilch of that when female protagonists take the floor. There are also lots and lots of military talk in here, which is to be expected considering one of the main characters is a soldier. I don't want to say that's how males write, and females write something opposite, but I like to think that there are some things men like to focus on, and other things women like to focus on. There is also a lot of biology talk in here, and funnily, that is where I generally began to get a little queasy. If you have read the book, you will probably understand what I mean.

Ultimately, when I read books like this, it is the ending I am most interested in. This is a dystopian world after all, and how the author chooses to end is as important as how the author builds the world. Does it end positively? Does it reverse the dystopia? Does it end up revealing something laughably funny just to end the story? Or does it send the world into more dystopia? I thought it was a mix of positive ending and more dystopia, with a little bit of that silly big reveal at the end. It's hard to explain, and it does make some sense, but I did wish for a different ending.

Ultimately, this book is worth reading for the ride and the suspense. The writing isn't great, but it doesn't ruin the reading experience. You can glaze over some of the technical stuff - you will get the gist of it. And while some parts of the book did leave me a bit meh, the sum of it all left a positive feel in my head.


I received this book for free for review from the publisher, Hachette, via NetGalley.
Armchair reading in United Kingdom

Ti Reed said…
That opening is very strange. I have to say though, that I am intrigued by it And unlike Kathy, I am still in love with this genre.
June 12, 2014 at 6:42 PM

Jenny @ Reading the End said…
I'm not at all over dystopia, but I am VERY over the Male Gaze. I get so fed up with people carrying on reinforcing gender stereotype all over the damn place. *cranky*
June 13, 2014 at 8:02 PM

literaryfeline said…
I have this one in my queue to read and so skimmed your review. It sounded different enough and so I figured I would give it a try. I am saving your review so I can come back to it when I do read it.
June 16, 2014 at 5:50 PM

Helen Murdoch said…
I like the cover of this book, but from your description it sounds like it doesn't fit (the kids being in restraints). I've been reading a bunch of easy YA to get my summer going
June 22, 2014 at 11:03 AM

Athira / Aths said…
You'll pretty soon figure out why they are in restraints and I didn't really mind it one bit. It was just weird when it started like that. But yeah, although this read is fast and intriguing, it may not be very easy - it does make you think quite a bit.
June 27, 2014 at 7:52 AM