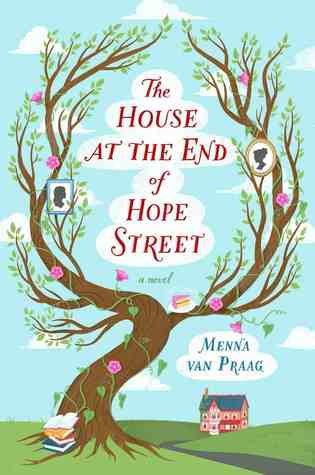 "I love chocolate cake for breakfast," Peggy stalls, "it sets me up for the day. A little decadence is good for the soul."


The House at the End of Hope Street got on my radar only recently, when Wendy mentioned the book as one of her top favorites. The premise of the book sounded fabulous and my library had a copy as well. I started reading this book shortly before leaving for my Canada trip and what I thought would be a fast read ended up taking about 2-3 weeks total. Not because the book was hard to read or boring. On the contrary, it was quite entertaining, but it was not a book I could race through.

Distraught from a tragic experience, Alba was walking through her hometown when she comes across a house she had never seen before. The owner of the house, Peggy, invites her in but tells her that she can only stay for 99 days and has to turn her life around before then. Alba is glad for the offer - she didn't think she could face her family just yet. Over the next few days, Alba finds that this is no ordinary house. Indeed, the house seems capable of sending messages to its inhabitants, hiding or revealing things depending on whether anyone in the house needed extra motivation to get their life sorted out.

Along with Alba, there are two other inhabitants who discovered the house just like she did - Greer, an actress whose acting career never really took off, and Carmen, who seems to have run away from something terrible, away from her husband. As these three women try to find out what they really need in their lives, Peggy is dealing with matters of her own. Apparently, the house wants her to retire and find a successor. Retirement usually meant death for the owner of the house but Peggy loved a man and wasn't sure how to live the rest of her life with death looming in front of her.

I picked up The House at the End of Hope Street mainly because it sounded charming. And it sure did live up to its charm. The plot is mostly predictable, at least towards the ending, and that could be part of the reason why I couldn't read more pages in a sitting. It also took a long time for the plot to develop and the frequent change of narrators didn't help it much. But, my reading experience did not suffer despite those issues. There is something to love about a house that was magical - a house that suddenly revealed a whole wardrobe full of gowns, a house that gave plenty of inspiration when the going gets tough, a house where past inhabitants lived in its pictures and often talked to Alba, a house that had its own ghosts - a cat named Mog and a woman named Stella who was bent on helping Alba. Alba had a secret ability that made her extra sensitive to the house's secrets. Although Greer and Carmen were privy to some of these secrets, they didn't really know the full gamut of the house's powers.

There is much I loved in this book - it's one of those feel-good books that leaves you with a deep contentment. The house revealed itself only to women who needed a pick-me-up, and anyone else who walked through its doors were invited by the inhabitants. The past clientele includes several incredible women - great thinkers, writers, and poets. Chief among them were Virginia Woolf, Sylvia Plath, Agatha Christie, Dorothy Parker, and Beatrix Potter. Books also play a huge role in this book. I can see how you could want to read every book and writer mentioned in this book - that would make for a great women's fiction reading project. Overall, definitely charming, though predictable - this is something to read when you are looking for a whimsical read.


I borrowed this book from my library.

Kay said…
I remember hearing about this book some time ago. And I promptly forgot about it. I wonder if this is where Agatha Christie went on her famed 'ten day disappearance'. :-)
May 13, 2015 at 9:01 AM

Mystica said…
I think whimsical does the book right. Read another book by this author. Also similar
May 13, 2015 at 10:20 PM

Athira / Aths said…
I should check out her other books. Somehow that thought didn't come to me. Whimsical books are sometimes great to read!
May 21, 2015 at 3:26 PM

Athira / Aths said…
Hope you enjoy it! I haven't read any of Dorothy Parker's books - someday will have to try to change that. Parker did feature prominently in this book.
May 21, 2015 at 3:27 PM