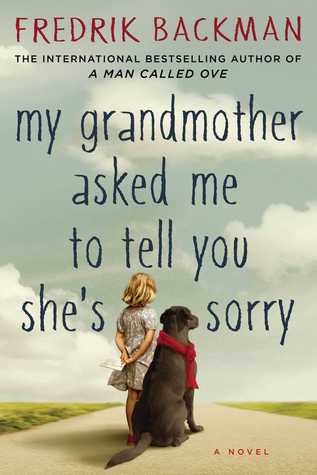 Every seven-year-old deserves a superhero.


Thus begins Fredrik Backman's latest novel about a little girl named Elsa whose grandmother is essentially her superhero. Elsa and her grandmother are very close, so close that her grandmother has built a whole fantasy world called the Land of Almost Awake and the two would head there every night at the moment they are almost asleep. She has conceived fairy tales from this land that sort of mimic real-world experiences involving Elsa and some of the people they know in real life. Elsa has been getting bullied at school and these tales and this fantasy land is a way for her grandmother to teach Elsa to be strong and how to battle real-life demons.

But her grandmother is ailing of cancer and dies soon, leaving Elsa very heartbroken and angry. But she has been left a last task by her grandmother - a treasure hunt that involves finding some letters she has written to be delivered to some people in their building. For there are several strange and interesting characters who live in the same building as Elsa - among them, a reclusive man who is obsessed with cleanliness, a huge hound that doesn't seem to have an owner, a couple who seems to have a surplus of cookies, and a man who seems to drink coffee all the time.

Remember last year's phenomenon that was A Man Called Ove? (What - you haven't read it yet? You better get hold of that book somehow because that is one of the most amazing books out there.) My Grandmother Asked Me to Tell You She's Sorry is written in the same vein of innocent humor as A Man Called Ove was. It's really hard to explain Backman's writing style, except to say that it is endearing, quirky, and fun to read.

Elsa is an almost eight-year old who describes herself as different throughout the book. It is never mentioned how she is different and for a quarter of the book, I kept waiting to find out. But then I realized that it doesn't matter - every kid is different somehow and probably gets teased for it. This book is for those kids. This book is to show those kids that they can be heroes too and make a difference in the world.

I loved her grandmother's Land of Almost Awake. It was a fabulously constructed world that could be in a book of its own.

If there is one thing I didn't like about this book, it was the pacing. I thought the story could have moved a little faster and still retained all its charm. One of Backman's techniques is to use repetition to make things a little cuter and while it worked well in A Man Called Ove and works pretty well in this book too, it was a tad overused in a few cases - this seemed to slow down the book a bit.

That aside, this is a highly recommended read. If I had to pick a favorite between Backman's two books, A Man Called Ove is the clear winner. But this one is also very engrossing. The only thing I would worry about is whether Backman's writing style will get tiring, the more we read his books. I hope not.


I received this book for free for review from the publisher via NetGalley.