The Emperor of all Maladies by Siddhartha Mukherjee 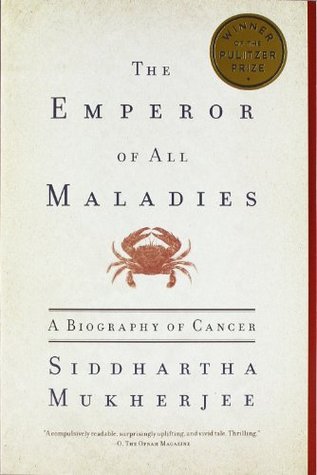 It remains an astonishing, disturbing fact that in America - a nation where nearly every new drug is subjected to rigorous scrutiny as a potential carcinogen, and even the bare hint of a substance's link to cancer ignites a firestorm of public hysteria and media anxiety - one of the most potent and common carcinogens known to humans can be freely bought and sold at every corner store for a few dollars.


This might be the first scientific and technical book that I read for leisure. As a science student in school, I used to read books like these to help my grades along; so for the longest time, I resisted the idea of reading them for fun. After reading a lot of book reviews though (of this and other subject-focused books), I have begun to love the idea of reading technical books about a certain topic, though I haven't really gone out of my way to read them. But it took me two tries to finish this book - the first try was short-lived (just a couple of pages) and the second was always in danger of being abandoned. In the end though, I finished it, and felt rewarded for doing so.

The Emperor of All Maladies is basically what its subtitle says - a biography of cancer. It starts its story way back when, from how the Persian Queen Atossa's slave cut off her malignant breast to the present, when there are countless drugs to delay the inevitable. As boring as I worried this book would be, it turned out to be the opposite, with a few caveats though.

Cancer is clearly the one illness that no one wants to think or talk about. All of us probably know at least one person who has or had it but it's more likely that we know or knew more than one person with this illness. The prognosis is almost always grim, sometimes with an immediate outcome, other times with years before that outcome, but we all know how it will likely end. How then do you write a biography of such an illness? Isn't this what most of us are doomed to meet?

When I started eying this book, I was looking not just for history but also for options that will help prevent cancer. After all, as Mukherjee stresses heavily in this book, prevention is the best cure. I didn't exactly get that but I wasn't expecting to (because if that magic prevention strategy is out there, then nobody would be getting sick). But I got a lot more from this book. In fact, when I finished the book, my first thought was that I felt no longer scared of this disease because Siddhartha Mukherjee opened my eyes to a different way of looking at things.

Mukherjee starts and ends the book with the story of one of his patients who was battling cancer. While he narrates specific experiences from his life, he interleaves the stories of how cancer has showed up at specific times in history. How it was once suspected that black bile is the cause of this disease, how excising the tumor was the norm centuries ago. It is fascinating to see how scientists came to the many conclusions that we take for granted today.

Mukherjee also makes a brilliant attempt at showing progress in this "story" of a protagonist that kills people. Most of the advancements in oncology have helped "cure" cancer in many people and yet, the number of people with cancer has only gone up. He explains that this is because there are more cancer survivors now than there was in the past.

I will admit that as interesting as this book was, I did find it a tad too long. At 22.5 hours, it kept me company through countless 20-minute commutes to and from work, and after a while, I just wanted it to end. I don't know that reading this book would have been faster. Probably not, because I may have bailed out early enough. The audiobook medium is probably the best way to get me to "read" books like this one. If you don't mind the length and would like to know more about how cancer became the towering force it is today, then you should certainly consider this book. I learned a lot and although I have forgotten a good portion of the details, I would love to add a print copy to my library that I can refer to once in a while.

PS: If you were wondering what carcinogen Mukherjee is talking about in the quote above, it is cigarettes.