Fever at Dawn by Péter Gárdos 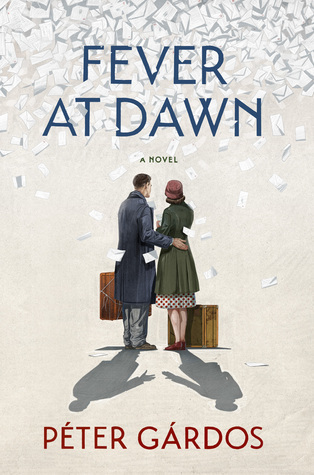 'As matters stand,' he explained, 'medical science says that you are too gone to come back. There will be good days. And bad ones. I will always be next to you. But I don’t want to lead you up the path. You have six months. Seven at most. My heart is heavy, but that is the truth.'

When I read that this book was about two people falling in love after a series of letter exchanges, I wanted to read it. Miklós has been given a death sentence by his doctor - his TB is expected to kill him in six months. Miklós is in denial however and is foolishly optimistic that he will not die. So he pens identical letters to 117 women under the age of thirty who were born in his hometown and are also convalescing in various Swedish camps. Some of them write back, among them a woman named Lili. He is immediately charmed by her and decides that she will be his wife. Thus begins a long session of letters flying back and forth while both Miklós and Lili face the realities of their illnesses.

A few months ago, I read about a couple who had never met in person but had been chatting with each other online. When they met for the first time, the guy proposed and the girl accepted. As happy as I was for the couple, I was very bothered by the idea of not meeting your better half before agreeing to marry (though this happens quite often in reality). Miklós and Lili do meet a few times, but in that age when handwritten letters was the main form of communication (with telephones a distant second), it is even harder to imagine a love story like that. But, their story is based on the author's parents and how they met, so that made it all the more admirable. Still, this book left me wondering how two people can fall in love so easily through letters? I don't doubt they can but this book didn't show it well. I couldn't believe that they were really in love because we only see snippets of the letters. Perhaps more details in the initial letters would make this more convincing.

There is a levity in the tone of the book that I had mixed feelings about. While on the one hand, it gave the book a quirky feel (it reminded me of Fredrik Backman's books), on the other hand, it didn't suit Lili at all - it made her appear very insignificant and childish. I also felt that the plot was jumpy and the writing a little disjointed. This is likely a translation/egalley issue - it isn't visually obvious which passage is an extract from a letter, because there aren't any clear markings. I hope the book is better in this respect.

This book is set right after WW2. Both Miklós and Lili were rescued and brought to their respective rehab centers to help with their recovery. Many of their friends were also being treated for similar illnesses. As always, reading a book set against a war backdrop can be very humbling. As light as this book felt most of the time, it doesn't belittle any of the suffering that war imposes. Since this is set immediately after the war, most of the focus is on "waiting". Waiting to go home, waiting for your loved ones to come home, waiting for news of someone. Just waiting.

At the end, I was still not sure if I was glad I read this book. It is a beautiful story and knowing that it is based on a true story made it more intriguing. However, from a story's perspective, I felt that it missed something. There was no suspense or any deep character study and it felt harder to turn the page. However, this is a fast read so that helped some.

I received this book from the publisher for free for review.