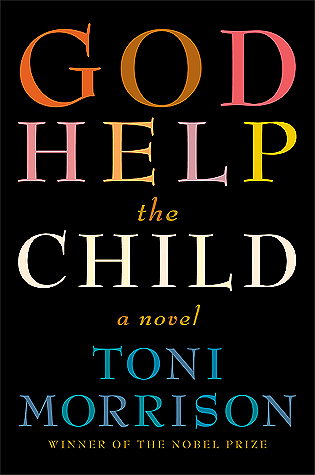 What you do to children matters. And they might never forget.

This summer (which is almost at an end, though you would not say that looking at the heat index), I wanted to read more authors that intimidate me, so that I can stop saying that (1) they intimidate me, and that (2) "I have been meaning to read this author since forever". One of those authors is Toni Morrison, whose The Bluest Eye and A Mercy already grace my bookshelves. But I chose to read God Help the Child instead because my ebook hold came through from the library and ebooks are what I mostly read now.

I don't have any previous Toni Morrison experience to compare this book to but many have mentioned that this isn't her best. However, I enjoyed this read. I didn't love it but I liked it enough to say that I want to read more of her books.

When God Help the Child begins, Bride's boyfriend Booker walks out on her. "You not the woman I want," he said. Words that can hurt anyone who receives them, but hurts Bride especially hard because of her history with being unloved (but we don't know this yet). Bride is this confident successful entrepreneur who wears her blue-black complexion as a prize. She wasn't always like that though. When she was born, her mother was disappointed by her complexion. She never showed the girl any warmth, believing that the girl was destined for a hard life and it was necessary to make her tough from childhood.

Booker also had a troubled childhood that has influenced most of the decisions he made. He doesn't appear until later in the book so I don't want to say a whole lot about him. The main thread in this book out of its many intricate threads involves Bride searching for a woman she helped put behind bars as a kid.

The best word that represents this book is onion. It appeared simple enough initially but the more I read, the more layers came off - layers I didn't even know existed. There are so many themes to explore in this book, chief among them being the impact of childhood sufferings on adulthood. This is a theme that fascinates me a lot - when do parents stop being responsible for their adult children's faults, if ever? And what if there is a particularly traumatic incident in a person's childhood? I loved how everything came together at the end. I won't say it was a nice little bow but it explained a lot.

I can see why Morrison is viewed as a very accomplished writer. Plot-wise, I wouldn't rank God Help the Child as particularly high but this book left me with so many thoughts that with each passing day, my respect for Morrison grew. She explores relationships and actions / reactions intimately in this book. If this isn't her best work, as many put it, then I can't wait to read her better works, because even if I didn't love this book, I was impressed.

What is your favorite Morrison book?