Ten Days in a Mad-House by Nellie Bly 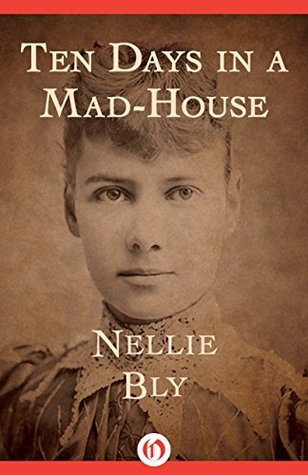 But here was a woman taken without her own consent from the free world to an asylum and there given no chance to prove her sanity. Confined most probably for life behind asylum bars, without even being told in her language the why and wherefore. Compare this with a criminal, who is given every chance to prove his innocence. Who would not rather be a murderer and take the chance for life than be declared insane, without hope of escape?


I can't remember where I first heard of this book - it was probably in an article discussing the 2015 movie based on this book. But when I heard that this book features a woman reporter going undercover, pretending to be "mad" (which means so many things in this book) in 1887, I knew I had to read it. While Nellie Bly's investigative effort was remarkable to read about, her opinions about how women were treated in those days by men (aka feminism) were also very interesting to read.

When Bly's employer, Joseph Pulitzer, asked her if she could go undercover to investigate whether there is any truth to stories of neglect in the Women's Lunatic Asylum at Blackwell's Island, she jumped at the opportunity. A part of her was nervous about this assignment. She had never before met a person who has been diagnosed as "insane". So she didn't really know how to pretend to be one. But they were just details to her. She was willing to roll with the flow and see how things go.

And roll she did. She wanted to first be discovered and reported by someone that she was in distress and exhibiting certain mental behaviors. This she did by staying at a boardinghouse overnight, refusing to sleep, and having weird conversations with others. After being examined by several people and getting them all to agree that she needed to be admitted to the Insane Asylum, she finds herself at the institute one day and very soon, feeling thankful that she was going to be there only temporarily.

Ten Days in a Mad-House is an incredible read, albeit having a very sad tone. Bly is certainly very resourceful and thinks very well on her feet. She is also very defensive on behalf of her fellow inmates and writes several thoughtful passages in their honor.

I found it incredible, as did Bly, that all the doctors who diagnosed her as being mentally sick didn't really test for anything. She mostly acted as her normal self, except initially when she wanted to get checked in. And yet, the doctors continued to check her dilation and temperature to determine if she was mentally ill. Most of the nurses taking care of her and fellow inmates were being downright cruel. There were also several inmates who weren't given their due care even though they clearly had physical conditions that needed treatment. There was one woman who didn't know English and yet the doctors decided she was insane. What was even more exacerbating was that all these women were mostly isolated from their families and friends while they were on the island and there was no opportunity for them to get out.

Another factor that made this book interesting to read was that the language and customs of the 1880s were very much in play. At one point, the judge dealing with her case says "she is well dressed, and a lady. Her English is perfect, and I would stake everything on her being a good girl. I am positive she is somebody's darling" as an explanation for why there was no one to claim her as family. There are several references to being "womanly", a term that made me cringe a lot.

The hardest part of reading this book was learning about how these women were mistreated at the asylum. For instance, when it was time for their baths, they were all dunked one after the other into the same cold bath water, which was changed only when it became very dirty. The same towels were used on all of them. They didn't get sufficient nutrition. The "most violent" among them were chained to each other. If they ever did not follow instructions, they were tortured. It was dreadful.

I would like to go find the movie and watch it. I'm sure it will be a difficult experience to watch it but Bly's brave attempt to have this reported is well worth reading about and watching. If your library has a Hoopla account, then this book is very likely available on it. If not, this book is available for free online as well. Highly recommended!


What is a your favorite pre-1900 book that features an strong woman protagonist?


I borrowed this ebook from the good old library.