Five Things Before the Election | This Week's Five

Posted on November 07, 2016
This post is coming to you one day later than planned! We drove to DC this weekend and had some fabulous friends-and-family time. Since we got in very late last night, I took today off from work, hoping to get some ignored chores done.

1. What's up with the weather nowadays?

Two weeks ago, we were out in our winter best but then last couple of weeks were more like Fall. And then this week, we had some 80 degree weather. (Please make up your mind, Mother nature!) We took advantage of these warm days however. We've been taking walks and hanging out on the deck. There's nothing like the threat of an upcoming winter that makes me want to get some sun. Still, I wish I knew what sweater weather to expect each day.

I don't think I ever mentioned this on my blog but back in March, I took up bullet journaling and have never looked back since. Prior to that, I've been trying out app after app, hoping to find the one app that was simple enough and yet did everything I wanted it to do. There was no such app so I adopted the bujo instead. It's one of the best things I've added to my life. I now actually get stuff done! Do any of you bullet journal?

On Friday, I decided it was time for a hair makeover. For a long time, I've been building my courage to go very short. And finally, I did it - I chopped off some really long tresses (not really, but long for me). And I love it. It's exactly as I was visualizing it. Kudos to my hairdresser for such a fabulous job! 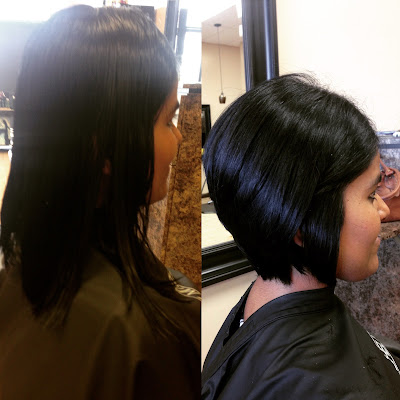 If you have been following my blog for a while, then you probably know that I love tea. Especially sweetened black tea with some milk. Hot. No iced tea for this girl. Last week, the founder of Plum Deluxe sent me a few samples of some teas and wow, I am seriously impressed. I am not much for spiced or flavored teas - I do sometimes enjoy a cup of ginger tea but that's usually the extent of my tea adventure. So I wasn't really sure what to expect from the teas I got from Plum Deluxe. But wow, I loved the two I already tried - the Morning Blend and wait for it... the Reading Nook Blend. How can you not love a tea with a name like that? I know I'm going to be stocking up on some of their teas soon.

I mean, seriously. I am ready for this show to be over. But I'm also very terrified of what could happen, if this election was any indication. I've come across quite a few people over the past few months who have decided that "political correctness" is not for them so they are going to say anything they want to say, unfiltered, which usually means making racist or sexist comments. So yeah, I will probably be glued to my phone and TV tomorrow, with my fingers crossed. As I'm sure, most of you will be too.


Are you going to have an election party? Or would you prefer to pretend it's not happening?