Me Before You by Jojo Moyes 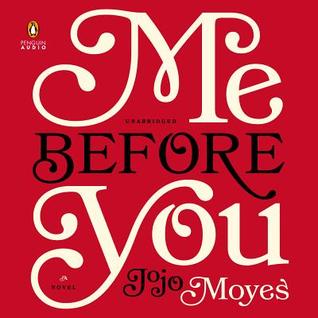 I will never, ever regret the things I've done. Because most days, all you have are places in your memory that you can go to.


Will Traynor is just stepping out of his hotel to start a busy day of work when he gets hit by a car, making him a quadriplegic for life. Grumpy and hard to be with, he doesn't do anything to make the lives of people around him better. They do not call him out on his irritable actions, fearing they will upset the quadriplegic in him. After two years of living like that, he requests his mom to let him die. He wants to go to Dignitas in Switzerland, where assisted suicides are provided for terminally ill people. But he gives her six months. She seizes on that lifeline to find someone who can be a life partner to Will and help him change his mind. Louisa Clark is that person.

Louisa, having just lost her job after her boss decided to shut down the coffee shop where she worked, found about the caretaker job after searching high and low for something that she could do. She didn't initially want the job as cleaning up after old people is not something she wishes to spend her time on, not that she had any options. But after being convinced that looking after Will will not involve any of that (plus, she was going to get paid a lot), she took the job. To say that Will and Louisa got off to a great start will be a huge lie. They didn't. Will didn't try to make it easy for Louisa, and Louisa, chatty though she is, struggled to penetrate the thick bubble around Will. The description of her job however requires her to spend a lot of time with him, and slowly they get to know each other.

Ah, Jojo Moyes. Why did you have to write such a sappy boring prologue to such an incredibly amazing book? I tell ya - if I don't like the first two pages of a book, I don't bother with it. That's what happened when I picked this book to read months ago. It sounded like another sappy light romance book (the kind I enjoy watching movies about but not reading about). But couple of months back, I gave it one more try on audio. I'm very liberal with audiobooks - I reserve it for books I sort-of want to read but am not yet sold on it. Oh, and it shouldn't be very literary nor should the writing be a treat to read, because then I would rather read it. I made myself sit through the yet-again sappy prologue, but after that, I was hooked. There is so much goodness in this book that I want to rave about, but first, I do want to reiterate that this is not a sappy romantic book. In fact, there is so little romance to speak about. Yeah, I know the cover seems to sing hymns for Saint Valentine but rest assured, the book has very little of that.

Me Before You is really about a lot of things but the core theme is that of Will's desire to die. Losing your ability to do anything by yourself can be a real blow in itself, and then finding that you cannot do a decent day's job, much less work at the head of a corporate company, or that your relationship with your girlfriend is suffering and then finding her dating your colleague, can be really painful to digest. Moyes does a great job of showing Will's perspective. I started the book by saying that no way, suicide is pretty much a crime, but my thoughts were all over the place by the end. She does a great job of putting you in his head and then you would feel bad if you still believed that he shouldn't be allowed to die, especially if you still had two arms and legs and could take care of your bathroom needs.

But she also shows the other picture - the people who have invested in Will's life, the people who love him dearly and would love his company every day. Louisa does a heck of a job keeping Will's spirits up. She makes him see that he can still do a ton of things, that being bound to a wheelchair doesn't mean not being able to live and enjoy life. After all, that is her job - to make sure he sees value in living and doesn't decide to die.

I loved Me Before You because it really makes you think about how people with disabilities live. It makes you stop making judgments on other people's choices or imagining answers to the "What would I do in his situation" questions. It makes you reevaluate your blessings and be thankful for what you have and not take those for granted. Because that's what happened to Will - he was living a dream when it was snatched away from him.

But that said, there IS a lot of sappiness in this book. That is part of the reason why I couldn't get past the prologue when I first attempted it. (He smelt of the sun, as if it had seeped deep into his skin, and I found myself inhaling silently, as if he were something delicious.) Audiobooks have a way to dulling the impact of some of those eye-roll triggering lines. Which is a good thing because otherwise I may not have lasted the entirety of this book. Funny that I couldn't read the book and then I go give 5 stars to the audiobook.

I listened to this audiobook via Audible.

bermudaonion(Kathy) said…
I listened to this and thought it was fantastic! I had to pull into a parking lot at the end of the book to compose myself.
February 11, 2014 at 7:26 AM

readingtheend said…
Audiobooks made overdone passages seem less silly to you? Huh! I would have thought the opposite would be true -- at least when you're reading a print book, you can skip past the cringe-inducing parts.
February 11, 2014 at 8:07 AM

Alex (Sleepless Reader) said…
I've seen this everywhere lately and it made it to a lot of best-of-2013 list. You're right, the cover (and title) do mislead you. I'm more lenient towards cheesiness in audiobooks, but a bad sex scenes can kill a book immediately.
February 11, 2014 at 10:28 AM

Juju at Tales of Whimsy.com said…
Sounds fantastic. I'm probably too chicken to read it (I hate to be sad) but it sounds fantastic.
February 11, 2014 at 11:37 AM

Tea Time with Marce said…
I really want to read this one even though at times it sounds so not me. The emotional part I hope helps me through the chick lit or eye rolling parts.
February 11, 2014 at 1:21 PM

Helen Murdoch said…
Not five minutes ago one of our Assistant Principals told me she had just read this book and really enjoyed it and there was your review waiting in my Feedly inbox! Now I've got to add it to my TBR list!
February 13, 2014 at 5:15 PM

Lisa Sheppard said…
This one came to me unrequested way back when and I made the mistake with that prologue that you did...except I literally ditched the book, gave it away. Kicking myself now, especially since my book club is reading it this month.
February 13, 2014 at 9:04 PM

Kim Ukura said…
I'm not sure I would have read this one based on the first few pages either. But when it was big last year and so many people were gushing about it I decided to give it a try and I was really glad I did. What a sad, complicated, tear-inducing book. I'm also the same way on audio -- if I'm listening, I will let all sorts of stuff slide that I just don't in print.
February 15, 2014 at 5:56 PM