March and April in review (and a look at May/June)

Both March and April were somewhat slow months for me in reading. Part of it is probably because of the return of some of my TV shows, but a busier work and life is also to blame for some of that lack of reading. I spent part of March in Toronto, Quebec city, and Niagara and spent very little of that vacation reading anything at all. April ended up being a recovery month from some of that vacation, plus I have a vague feeling of decluttering something this whole month. So it isn't until the readathon at the end of April that I really got into a reading spree.

These are the books I read the past two months. 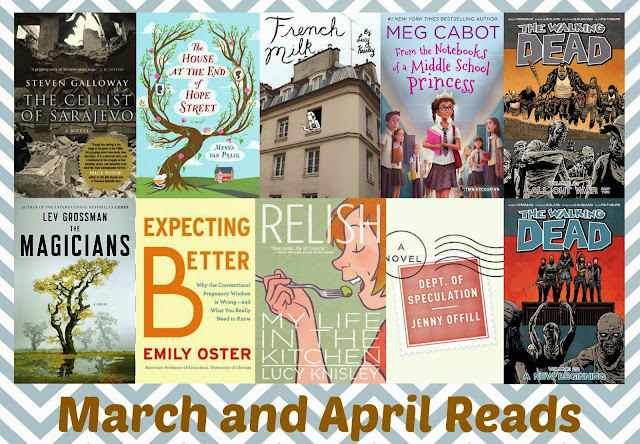 I loved many of these books so it makes it hard picking any kind of favorite. The Cellist of Sarajevo was very thought-provoking, The House at the End of Hope Street was quirky, Expecting Better was informative, Relish was fun, Dept. of Speculation was hard to put down. The Magicians and French Milk were sort of bummer reads - the former suffering from execution and the latter from not meeting high expectations.


Blog highlights from March and April
The Joy of bookstore hopping
Canada trip highlights and this is the (huge) bag of books I bought there.
Readathon in numbers
The Walking Dead, Vols 9 to 23


Plans for May and June
I am still determined not to plan my reading but after four months of obstinately sticking to a no-plan reading, I find that having some kind of small events or projects definitely make reading feel a lot livelier for me. So this month, I am doing two readalongs - Flowers for Algernon and A Visit from the Goon Squad and also plan to take part in the Armchair BEA event if I can have my posts planned sufficiently enough.

As for books, I don't really know what I will be reading beyond the books from the two readalongs but this is my potential stack which may change at any time.

tanya (52 books or bust) said…
The Book of Speculation is on my list as well. I recently read Goon Squad and really liked it. I can see why it got all the hype. And Algernon I've not read since high school, but loved it back then. Wonder if it holds up? Looks like great reading for May.
May 5, 2015 at 6:03 AM

bermudaonion(Kathy) said…
For someone who's been working, vacationing, and preparing for a baby, I think you read quite a bit!
May 5, 2015 at 9:17 AM

JoAnn @ Lakeside Musing said…
I liked both of your readalong books and also loved The Guernsey Literary and Potato Peel Pie Society - didn't know she had another book! Flowers for Algernon was checked out of the library when I visited yesterday. Guess it's not meant to be right now...
May 5, 2015 at 10:14 AM

Jillian Raymundo said…
Awesome books! All of them sound good. The Book of Speculation and French Milk as I've mentioned on here before are the ones that are really capturing my attention. Glad to hear you liked The Book of Speculation. I hope you enjoy The Guersney Literary because I loved it. It was such a unique read.
May 5, 2015 at 8:00 PM

Belle Wong said…
I have had The Magicians in my TBR for a while now, and continue to be hesitant about it. And I didn't enjoy French Milk nearly as much as I've liked Lucy Knisley's later books, although the food aspect was lovely. It's always good to have a stack of potential reads!
May 5, 2015 at 11:14 PM

iliana said…
I don't typically have reading plans but do have my reading challenges, which of course I'm behind on! :) Looks like you read some great books. Looking forward to what you think of The Truth According to Us. I didn't realize she had a new novel out - yay!
May 6, 2015 at 9:20 PM

Charlie (The Worm Hole) said…
A good number nonetheless :) Sunbolt's not a bad read. I just finished it and it could've been longer but the writing is quite engrossing. What you've said about French Milk not meeting expectations, I've high expectations for it myself so I'll take that on board.
May 8, 2015 at 6:28 AM

Lisa Sheppard said…
I'm kind of getting into the idea of a reading plan that's really just more of a reminder to me of books that I have that I'd like to read sooner than later. But, like you, really more of a possibility than a "must do."
May 13, 2015 at 9:54 PM